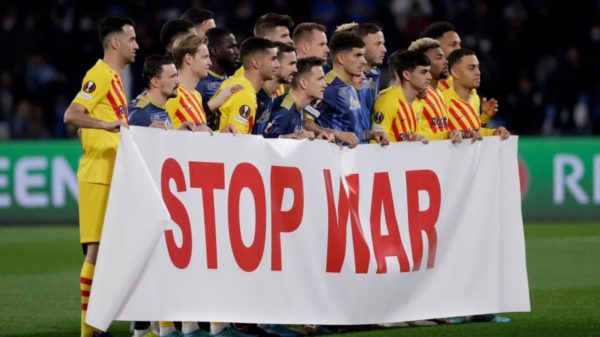 Its voice was probably not the most heard, among the avalanche of condemnations expressed by heads of state and political leaders around the world. But on Thursday 24 February, the IOC condemned the invasion of Ukraine by the Russian army.

The body referred to the Olympic Truce, adopted by the UN General Assembly on 2 December. It began seven days before the Beijing Winter Olympics and is due to end seven days after the close of the Paralympics on 13 March 2022.

Russia has violated it. It is no longer in breach of Olympic rules and values.

Suspended from the Olympic movement for two years, until December 2022, and excluded from international athletics for an indefinite period of time, Russia is becoming even more isolated. The sporting world is preparing to fight back. It is already concrete, but it could grow in the days and weeks to come.

The Champions League final, scheduled for 28 May 2022 in St Petersburg, will not be held in the Russian city. UEFA convened an emergency meeting of its executive committee on Friday morning. It is expected to make official the withdrawal of the match from Russia. The match could be relocated to Budapest.

The issue of the partnership contract between UEFA and the Russian company Gazprom should also be discussed by the executive committee. But it would be very surprising if the continental body announced its suspension.

Also in football, the play-off semi-final of the 2022 World Cup is very much in doubt. It is to be held on 24 March in Moscow and will pit Russia against Poland. The final of the same play-off would also be held in Russia on 29 March, in the event of a Russian victory over the Polish team. But the federations of Poland, Sweden and the Czech Republic, whose teams are likely to play the final in Moscow, have already announced that they “do not plan to travel” to Russia.

The European Handball Federation (EHF) has decided to relocate or postpone matches that were to take place on Ukrainian soil over the next four weeks.

In tennis, the ATP announced on Thursday 24 February that the Challenger tournament scheduled for next week in Moscow would not be held. “Player safety will remain our top priority in assessing the scheduling of ATP Tour and ATP Challenger Tour events,” the ATP said in a statement.

Its two-year suspension from the Olympic movement has significantly reduced the catalogue of international events Russia will host in 2022. But the country has nevertheless retained the organisation of the Men’s World Volleyball Championship. It is due to start on 26 August. At this stage of the conflict, the international volleyball body, the FIVB, has not yet taken an official position. It will probably give itself time. But the Polish sports minister has taken the lead by suggesting, on Tuesday 22 February, that the event be withdrawn from Russia.

Another hot topic: SportAccord. The international convention is scheduled for 15-20 May in Ekaterinburg. Since its last edition, organised in 2019 in Gold Coast, Australia, it has been cancelled and postponed several times due to the health crisis. The invasion of Ukraine by the Russian army clearly threatens its holding in less than three months in Ekaterinburg, even if the general manager of SportAccord, Nis Hatt, explained on Wednesday 23 February to the InsidetheGames website that the event was still planned at the initial dates and place.

Russia and Ukraine have a common Olympic project. It is already in the pipeline. Ukraine is eyeing the Winter Games in 2030. The head of state informed Thomas Bach of this during his visit to Kiev last year. Russia is preparing a bid for the Summer Games in 2036. It has launched a national process to select a candidate city. At least five cities have responded.

Can they survive the military conflict? Doubtful. Its invasion by the Russian army will probably push its Olympic ambition far down Ukraine’s agenda in the coming months. As for Russia, its declaration of war makes it the last country where the IOC could set the stage for the Olympics without risking the wrath of the international community, even by 2036.