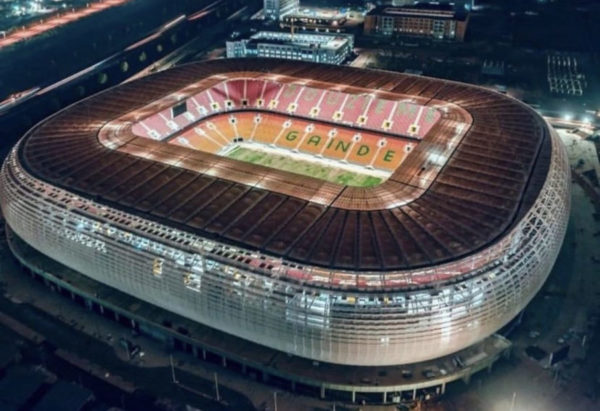 The event may still seem far away. Four years and a few months. More than one Olympiad. But the 2026 Youth Games in Dakar, Senegal, added a new piece to their set-up on Tuesday 22 February. It is an important one.

Senegal has acquired a 50,000-seat stadium, which was inaugurated with great fanfare in the town of Diamniadio, some 30 kilometres from Dakar. The evening had the feel of a national event, and even a little more than that. The presence in the official gallery, alongside President Macky Sall, of six heads of state, from Turkey (Recep Tayyip Erdogan), Rwanda (Paul Kagame), Liberia (George Weah), Germany (Frank-Walter Steinmeier), Guinea-Bissau (Umaru Sissoco Embalo), and Gambia (Adama Barrow), is proof of this.

Other distinguished guests will be FIFA President Gianni Infantino and the President of the Confederation of African Football (CAF), Patrice Motsepe of South Africa.

The new Senegalese stadium, the first to meet international standards, was built in a year and a half by two Turkish companies. The announced cost: 156 billion CFA francs, or 238 million euros.

The stadium bears the name of the former Senegalese president, Abdoulaye Wade. “A tribute to his multi-dimensional, intellectual and pan-Africanist career,” suggested the current head of state, Macky Sall, during the inauguration ceremony.

The new stadium is the second largest sports building in the country, after the 60,000-seat Leopold Sedar Senghor Stadium in Dakar, which was built in 1985. But it is above all the only one approved by the international football authorities. In May 2021, CAF withdrew its approval of the Lat Dior stadium, located in the region of Thies, about 70 km from Dakar.

In addition to a main pitch, the Abdoulaye Wade Stadium is to house a football museum named in memory of former Senegalese national team player Papa Bouba Diop, who died in November 2020.

Very trendy: the stadium is also equipped with an independent solar power plant, with an announced power of two megawatts. Enough to make it almost autonomous in electricity, according to the Senegalese authorities.  The town of Diamniadio is linked to Dakar by a new regional train, which was put into service last December.

In the near future, the site will be used for football. This is normal. Senegal won the last edition of the African Cup of Nations (CAN) earlier this year. It is ranked first in the FIFA rankings for the African continent. On the agenda for the next few weeks is the first major match between Senegal and Egypt, on 29 March, for the play-offs for the 2022 World Cup.

But its destiny will also be Olympic. Macky Sall explained it without forbidding himself a certain lyricism, on Tuesday 22 February: “This beautiful infrastructure dedicated to youth is an invitation to pursue our path towards excellence”.

At the top of the Senegalese president’s list of priorities: the 2026 Youth Games in Dakar, the first Olympic event in the history of the African continent. The country had obtained the organisation for 2022. It was postponed by four years because of the health crisis.

According to Mbaye Jacques Diop, communications advisor to the Ministry of Sports, quoted by AFP, Senegal intends to position itself in the coming years as a key player in the development of sport in Africa. A strategy that should further strengthen the hosting of the 2026 Summer Youth Olympic Games. Its new stadium is part of the process of making Dakar “a sports hub” on the scale of the continent. It will also prevent matches from being relocated to Asia.