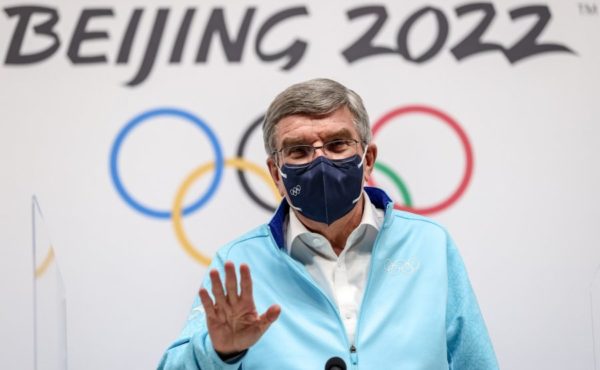 Thomas Bach was not present, Thursday 17 February at the end of the day, at the Capital indoor stadium in Beijing for the free program of the women’s figure skating event. The IOC President admitted it even before the question was asked: he followed the competition in front of his television. The ice rink was however the site where it was necessary to be, four days before the closing of the Winter Games 2022.

Thomas Bach did not make the trip. But he attacked his press conference of end of the Games of Beijing, this Friday morning in the main Center of the media, by returning at length on the evening of the day before. The German leader preceded the questions of the journalists by confiding his impressions of televiewer in front of the spectacle of the performance of Kamila Valieva.

The Russian skater made many mistakes, fell twice, put her hand on the ice, then finished in tears, her face covered by her red gloves. Fifth in the free program, she failed to finish fourth in the competition. The podium could be set up on the ice and the medals handed out. A boon for the IOC.

By his own admission, Kamila Valieva’s performance “disturbed” Thomas Bach. “I was very troubled yesterday when I watched on television, the IOC President admitted during his introductory remarks, before facing questions. I watched a performance where you saw all the pressure on his shoulders. I know from my athletic career what pressure is, but this one was beyond what I can imagine. She probably would have preferred to get off the ice and leave it all behind.”

Troubled, then, Thomas Bach. But also shocked. The president of the IOC told this Friday morning to have found the entourage of the young Russian skater of a “icy distance” with Kamila Valieva at her exit from the ice, after her free program. He swears to have seen, in front of his television screen, “gestures of refusal and rejection” from the two coaches, including the imposing Eteri Tutberidze.

Then he charged the entourage, accusing him without taking gloves to be responsible for the whole affair, since the positive control to a prohibited product, last December 25 at the Russian championships in St. Petersburg.

“It was cold, continued Thomas Bach. They did not try to help and comfort her. Interpreting the body language of her coach, it was dismissive. How can you be so cold to your athlete? It doesn’t give me much confidence in her surroundings, regardless of what may have happened, or will happen in the future.”

Eteri Tutberidze, the coach of Kamila Valieva, but also of the two Russian medal-winning skaters, Anna Shcherbakova and Alexandra Trusova, is known as a tough coach with her athletes, sometimes to the point of excess. Reuters deciphered her reaction after the performance of the youngest skater in her trio on Thursday night. “Why did you let her go? Explain to me, why? Why did you stop fighting completely? Somewhere after the axel, you let it go,” she reportedly said to Kamila Valieva as she left the ice, before knowing her score and ranking.

For Thomas Bach, there is no doubt that the young skater, only 15 years old, is the victim of the case. “The problem is the entourage, he insisted in a press conference. The culprits are those who administered this banned drug. But our means are limited to investigate. We are not the police. I hope the athletes will break their silence and ask for help. We have provided them with phone numbers and assistance. I hope they will use them and talk.”

Thomas Bach has identified the culprits. But the IOC president wasn’t at the rink Thursday night to confront the young Russian’s entourage. He was in front of his television.