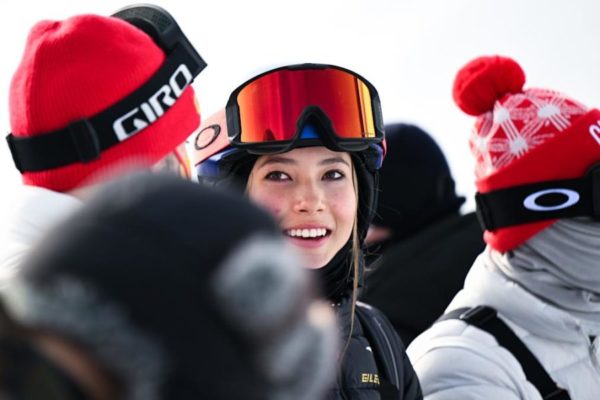 Every day has its own medal for the Chinese delegation at the 2022 Winter Games. Its podium of the day, this Tuesday 15 February, was secured at lunchtime. No waiting. The host country owes it to Eileen Gu, the most media-friendly athlete in the Chinese team uniform. She won the silver medal in the slopestyle, behind the Swiss Mathilde Gremaud.

With five days to go before the curtain falls, China is sixth in the nations’ ranking. They have 11 medals, five of which are gold. Eileen Gu alone brought home two, in gold and silver. She is in the running for a third, in the half-pipe, which is scheduled to begin on Friday 18 February.

Question: Is Eileen Gu really Chinese? The debate is not new. It began in 2019, when the young freestyle skier, born and raised in San Francisco, California, announced on social networks that she would be competing in the Beijing 2022 Games in the colours of China. But it has grown since the start of the Olympic Games and her victory in the big air, ahead of France’s Tess Ledeux.

On social networks, the question of Eileen Gu’s nationality is dividing internet users. It has been one of the most discussed issues since the beginning of the Winter Games. However, the young skier is not the only member of the Chinese delegation to admit to a distant link with the host country. Some 30 other selected athletes are not native Chinese citizens.

Regularly asked about her nationality, Eileen Gu cautiously avoids the obstacle. “I am American when I am in the United States. But I feel Chinese when I am in China.” Easy but unstoppable.

Eileen Gu grew up in California to a Chinese mother, but she says she has spent a few months every year in China since she was a child. She speaks in Chinese at press conferences, but sometimes gives the impression that she chooses every word.

Under Chinese law, dual citizenship is prohibited. Eileen Gu should have given up her American passport and chosen to compete for China in the Beijing Games. But the reality remains unclear. The young woman was questioned several times on this subject at the Beijing Games. Her answers did not settle the question.

“I’ve always been super outspoken about my gratitude to the U.S., especially the U.S. team, Gu said, sounding like she was reciting a script.I feel as though they’ve helped me out so much in my development, they continue to support me. And same with the Chinese team. They’ve always been super supportive and they’ve helped me so much. And so in that sense, I think that that speaks volumes to the ability of sport to bridge the gap and to be a force for unity.”

One thing is for sure: ambiguity about his citizenship is largely doing his business. Since his big air victory, sales of his ski suit, a model from the Chinese brand Anta, have increased 20-fold on the e-commerce platform JD.com. One of her other partners, the coffee brand Luckin Coffee, has announced that it is out of stock of all products featuring her.

The Eileen Gu effect is also benefiting Tiffany & Co. The American brand became very popular on Chinese social networks after the young woman revealed four rings, identified as coming from Tiffany, by taking off her gloves in the finish area of the big air. Eileen Gu is also backed by LVMH, Estee Lauder, Victoria’s Secret and Oakley. According to Chinese media reports, her earnings have exceeded $30 million since the beginning of 2021.