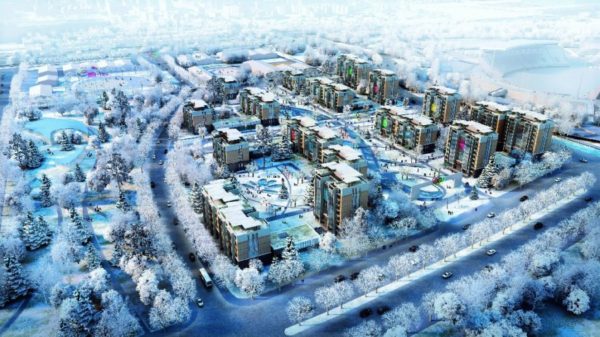 The Chinese are not losing their rhythm. True to the announced timing, they officially opened the three athletes’ villages of the Beijing Games on Thursday 27 January, eight days and a handful of hours before the opening ceremony.

The doors were pushed open early this morning at the entrance to the Beijing, Yanging and Zhangjiakou villages. The first delegations were announced for the afternoon. The Japanese women’s ice hockey team is expected to take up residence in the Beijing village buildings before the evening.

So the villages are open. At the appointed time. Without the slightest delay. The schedule of arrivals, on the other hand, is still very vague and uncertain. For several days now, travel postponements have followed one another without a break among the foreign delegations.

The cause is the COVID-19 pandemic. The new outbreak of coronavirus cases is causing serious chaos among the Olympic teams, a few days or hours before the first departures for China. Not all countries are affected, but many are seeing their squads shaken by the health crisis.

Six players from the Czech men’s ice hockey team have tested positive for the coronavirus, said national coach Filip Pešán. They are part of a group of 12 players from the Russian KHL (Kontinental Hockey League), the second largest professional league in the world after the North American NHL. According to the coach, none of the players who tested positive showed any symptoms, but they were all placed in isolation in a hotel near the national team’s training centre in Prague.

The Czech Republic has assembled a 24-man squad for the Olympic tournament, but has a plan B, with a group of 30 substitutes who could be included in the squad. A first contingent of players is due to fly to Beijing on Thursday 27 January. The rest of the team will join China later, depending on the negative results of the COVID-19 tests.

Norway has also been hit hard by the pandemic. Two of the stars of the Norwegian cross-country ski team, Heidi Weng and Anne Kjersti Kalvå, contracted the virus while training in the Italian resort of Seiser Alm. They are currently in isolation in Norway.

According to the manager of the cross-country skiing team, Espen Bjervig, their participation in the Olympic Games is now highly uncertain. Heidi Weng and Anne Kjersti Kalvå will remain in isolation for 10 days until 3 February, the day before the opening ceremony. The cross-country skiing competitions are due to start on Saturday 5 February. The two cross-country skiers were due to fly to Beijing on Thursday 27 January.

Russia has already bracketed a few names among its so-called “Athletes of the Olympic Committee of Russia” delegation. One ice hockey player, Artem Anisimov, tested positive. He was removed from the group, isolated from the team and placed on the list of substitutes. His participation has not yet been ruled out, but it looks very doubtful. According to the Russian media, the player feels fit, but he has to train alone.

On Tuesday 25 January, the Russian Figure Skating Federation announced the forced withdrawal of three-time national champion Mikhail Kolyada, who tested positive for COVID-19. He will not compete in the Beijing Games. His replacement has already been designated. He is preparing his pack.

Nikita Tregubov, silver medallist in skeleton at the PyeongChang 2018 Games, was also a victim of the virus. The Russian was kept away from the training camp for luge, bobsleigh and skeleton specialists in Sochi, on the track of the Winter Games in 2014, in anticipation of a possible departure for Beijing.

On the US side, the Olympic team was relatively unaffected. But one bobsledder, Josh Williamson, tested positive for coronavirus last Sunday. He will not be able to travel with the rest of his group on Thursday 27 January. His plane ticket has been put on hold pending further tests.

“There are later flights running to Beijing throughout the Olympics in anticipation of things like this, he explained on social media. I just need consistent negatives to be on one.”

Unlike the Norwegian cross-country skiers, Josh Williamson is not yet pressed for time. The Olympic two-man bobsleigh event will take place on 14-15 February, 10 days after the opening ceremony.