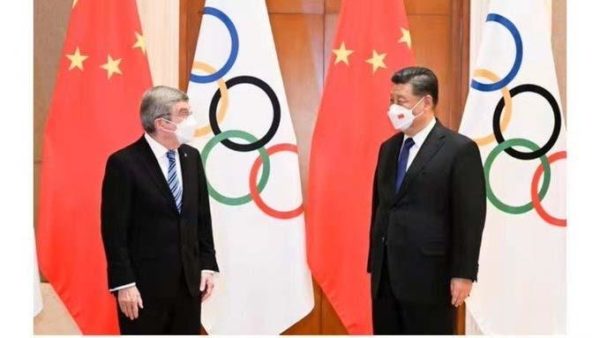 Thomas Bach can be happy about this: in China, he is really something. The regime in Beijing treats him like a head of state. And even better than that.

After being immortalised by a bust of himself in the Olympic Park in the Chinese capital, Thomas Bach was received on Tuesday 25 January by Xi Jinping. With just over a week to go before the opening of the Winter Games, the Chinese president spoke to the German leader in one of the few ‘real’ face-to-face interviews Xi Jinping has given to a foreign visitor since the pandemic began. It is said to be the first in nearly two years.

The images of the meeting, held in one of the Chinese government’s guest houses, were broadcast on Chinese television. Then its content was detailed in a very formal style by an IOC press release.

The Olympic body referred to a “In the traditional courtesy visit to the host Head of State ahead of the Olympic Games”. It explained that Thomas Bach had sent his “best wishes to the Chinese leader and people for the Year of the Tiger” in the run-up to the Chinese New Year.

The IOC says the two men discussed “the excellent state of preparations for the Beijing 2022 Olympic Winter Games, as well as all issues related to their success”. Thomas Bach praised the “work of the Organising Committee and the exceptional quality of the Olympic venues.”

He also congratulated President Xi Jinping on achieving his goal of bringing winter sports to more than 300 million Chinese across the country.

“China is now a winter sports country suggested Thomas Bach, quoted by the IOC. This is a new era for winter sports around the world.”

In the official photos, Thomas Bach and Xi Jinping stand as straight as justice, respecting social distance with surveyor’s manners (photo above). Both men are masked. But they appear without masks when the actual meeting takes place, sitting face to face around a banquet table set up in a room as large as an amphitheatre.

The human rights issue? The diplomatic boycott of the US, Australia, Canada and Britain? The Peng Shuai case? Not a word. With 10 days to go before the opening of the Beijing Games, Thomas Bach remains faithful to his position: not to invite politics to the Games table. A position of “neutrality” that the Olympic body and its president will certainly maintain until the closing ceremony on Sunday 20 February.

Thomas Bach arrived in Beijing last Saturday. He respected a three-day isolation at his hotel, as he did last July before the Tokyo Games. His meeting with Xi Jinping was therefore his first official outing.

The next part of the trip is less political. The IOC President will hold an Executive Board meeting on Wednesday 2 February at the Intercontinental Beichen Hotel in Beijing. He will then chair the 139th IOC Session, which is scheduled to take place in two stages, on 3 February before the start of the Games, and on 19 February on the eve of the closing ceremony. It will be held at the China National Convention Centre (CNCC).

The programme also included a dinner with Peng Shuai. Thomas Bach announced this during his 30-minute video conference with the Chinese player at the end of November. He concluded the exchange with an invitation to dinner after his arrival in Beijing, specifying that the other guests would be Finnish Emma Terho, Chair of the IOC Athletes’ Commission, and Chinese Li Lingwei, a former badminton player who is now a member of the Olympic body.

Since then, the IOC has not mentioned the dinner again.