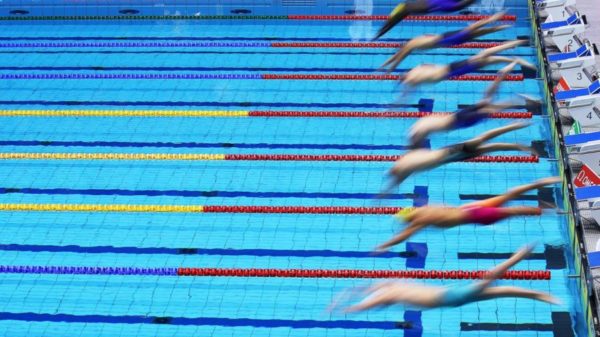 The Olympiad is only in its first few months, but it is already limping along. A new global event has just suffered the effects of the COVID-19 pandemic. Not the least. The Japanese city of Fukuoka announced through its mayor, during a press conference, the postponement of the next edition of the World Swimming Championships.

The World Swimming Championships were initially scheduled for July 2021 in Fukuoka. They were to mark the start of the new Olympiad and the road to the Paris 2024 Games. They were to be followed by another edition of the world event, in Doha in 2023, before the swimmers moved on to the Olympic Games in the French capital.

But the health crisis, and the postponement of the Tokyo Games by a year, forced FINA and the Japanese organisers to postpone the event by a year. Postponed to May 2022, the Fukuoka Worlds remained solid on its feet.

Last week, news of their possible postponement circulated around the pools. It was said that the organising committee had contacted FINA to ask them to postpone the Worlds once again. The reason given was the inability of a growing number of nations to organise selection events for an event that was only four months away.

In what has become a classic domino effect in the international sports movement, the postponement of the Fukuoka World Championships pushes back the next edition, scheduled for Doha. It should now take place in January 2024.

For the swimmers and their coaching staff, the preparation promises to be complex. The succession of the three events could lead some of them to give up the Doha Worlds, provided that they are not on the selection route for the Paris Games.

Another problem: the postponement of the Fukuoka Worlds will create a gap in the international calendar in 2022. Admittedly, the coming season has no shortage of major competitions, with the Commonwealth Games in Birmingham from 28 July to 8 August, the European Championships in Rome from 11 to 21 August, and the Asian Games in Hangzhou from 10 to 25 September.

But the American swimmers, in particular, are not involved in any of these three events. They could have been consoled by the Pan-Pacific Championships, originally scheduled for 2022 in Canada. But the Canadians postponed them to 2026, so as not to have to compete with the Fukuoka Worlds.