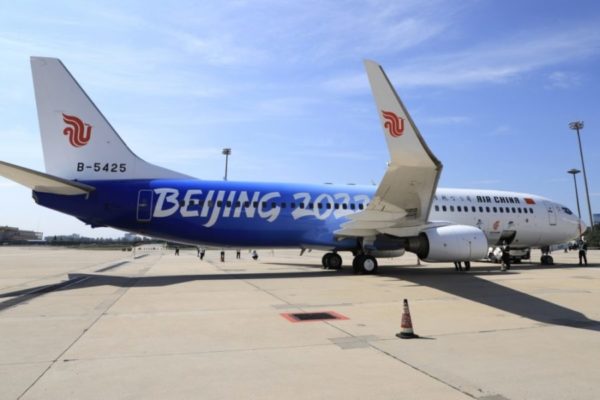 A new milestone was reached last weekend for the Beijing 2022 Winter Games. Over the weekend, the countdown clock fell below the three-week mark before the opening ceremony. On Monday 17 January, the countdown was down to 18 days to the lighting of the flame.

In the Chinese capital, the sanitary bubble was put in place on 4 January, just one month before the opening. While the first accredited guests have already arrived – there were more than a thousand of them in the middle of last week – the priority of the moment for the Chinese organisers is to succeed in the perilous challenge of arrivals.

At Beijing International Airport, the only point of entry authorised by the Chinese for the Olympic family in the broadest sense (athletes, staff, officials, media, etc.), part of Terminal 3 is dedicated to receiving travellers accredited to the Games. The arrivals are isolated from the other passengers. They enter the sanitary bubble as soon as they leave the plane. They will not leave the bubble until their final departure from the Beijing Games.

The challenge is great, but the Chinese have made it easy for themselves by allowing only charters and special, so-called “temporary” flights to carry Olympic accredited persons. On board, all the passengers belong to the Olympic family. There was no risk, therefore, of mixing delegation members, officials and media with “normal” passengers. This is logical, as they are not subject to the same rules for entering the country. Some business flights are also allowed, but only for the outward journey to China.

Better still, the Chinese have reduced the number of airports in the world from which it is possible to board a temporary direct flight to Beijing to less than fifteen. Europe has the largest number (Paris, Zurich, Amsterdam, Moscow, Istanbul).

As a result, there is no competition between airlines for ticket prices. Unsurprisingly, they have soared. 2,900 for a return trip from Paris to Beijing on a temporary flight operated by Air France in economy class. A record. There are only two possible dates before the start of the Games: 30 January and 2 February.

In Asia, Singapore Airlines charges nearly 1,500 euros for a Bangkok-Beijing flight with a stopover in Singapore, one of the three Asian airports (along with Hong Kong and Tokyo) authorised by the Chinese authorities to reach Beijing on a temporary flight. As a bonus, Olympic travellers are required to spend one night in a transit hotel at Singapore airport on both the outward and return journeys, as flight schedules do not allow the entire journey to be completed in the same day. The price of the night is not included in the ticket.

With such a pricing policy imposed by the airlines, the 2022 Winter Games are unquestionably the most expensive transport event in history.

Once in China, entry procedures are surprisingly smooth and quick. Pierre Ducrey, the IOC’s director of Olympic operations, told a technical press briefing last week that it took him only 45 minutes to get off the plane and onto the shuttle bus to his hotel.

Unlike the Tokyo 2020 Games, travellers do not wait at the airport for the result of the PCR test they have taken on arrival. They are transported to their hotel, where they must remain in isolation in their room until the result is known.

According to Zhang Liang, the director of the organising committee’s arrival and departure centre, the numerous pre-Olympic events held at the competition venues between October and December 2021 have helped to fine-tune the procedures. We were able to collect, integrate and analyse information on the arrivals and departures of more than 4,000 test-event participants,” he told Xinhua. These competitions have allowed us to test the reception procedures, the formalities for entering the country and the transport from the airport to the accommodation. We are ready for the Olympic Games.

The Organising Committee’s arrivals department is currently operating around the clock.