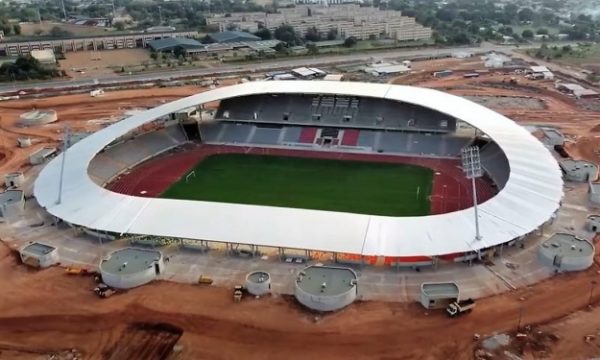 All the indicators confirm that this is a time of cost reduction, sustainability and legacy in the international sports movement. The IOC is leading the way. Others are following. The trend is not a fad, nor is it likely to be reversed.

But what about sports arenas? FrancsJeux interviewed Oliver Page, the international development director of the Paris-based architecture and urban planning firm called “SCAU” . The agency was part of a group of 100% French companies, led by Sogea-Satom (Vinci Construction), to build the Yamoussoukro stadium in Côte d’Ivoire. The facility was delivered last year, with stands supplied by Alcor Equipements. The 20,000-seat stadium will be used next year for the 2023 African Cup of Nations football tournament in Côte d’Ivoire.

FrancsJeux: How did you manage to win the contract for the design and construction of the Yamoussoukro stadium in Côte d’Ivoire, one of the venues for the African Cup of Nations (CAN) in 2023?

Oliver Page: We worked very early on, creating a Franco-French consortium led by Sogea-Satom (Vinci Construction) more than a year before the market opened. Faced with the Chinese competition, which we knew would offer a lower cost bid, we put forward our experience of sports stadiums, French expertise, know-how and the quality of the work. In 2017, we went to the Ivory Coast for the Francophone Games in Abidjan as part of a Medef delegation on sustainable cities in Africa. Paris was then campaigning for the Olympic Games in 2024. The delegation was large. The call for tenders for the design, construction and financing of the Yamoussoukro stadium came out at that time. We were in the right place at the right time.

What type of stadium did the Ivorians want for the African Cup of Nations?

The specifications were quite short, about ten pages long. We tried to apply the FIFA and UEFA standards, but we also gave a lot of thought to the legacy, particularly in terms of maintenance once the event was over. We therefore sought to strike a balance between these two aspirations, for example by reducing the number of hard standing areas. The land on which the stadium was to be built had the particularity of being several metres uneven. With Sogea-Satom, we imagined embedding part of the stands in a sort of natural amphitheatre. In our project, only the main stand with 10,000 seats was built in concrete. The rest could be dismantled. After the end of the CAN, it could be reused elsewhere in the country, as Côte d’Ivoire has a great need for local stadiums. We also imagined the presence in the Yamoussoukro stadium of premises that could be used all year round, for example for a sports management school. Finally, our project included a roof over all the stands, with the idea that all spectators, from the most modest to the most illustrious, should be equal and protected in case of bad weather.

We won the contract. The stadium was built and delivered by our Franco-French consortium. But its final version is quite different from our initial project. The client wanted a completely solid stadium. He did not want a temporary one. Our ideas were not implemented, but we are continuing to push in this direction.

The example of the Yamoussoukro stadium suggests that the current approach of the international sports movement, in favour of cost reduction and a sustainable legacy, does not yet affect sports venues…

The major sports institutions are beginning to think about this. FIFA, in particular. They are starting to think about modular venues. For the 2022 World Cup, for example, some stadiums will go from 45,000 to 20,000 seats once the competition is over. But the cascade effect between the international bodies and the developers takes time.

Are we currently at a turning point in the design and construction of major sports venues?

The health crisis has undoubtedly accelerated the process, with stadiums that have long been closed to spectators. In the field of sports venues, Africa is following Europe, Europe is following England, and England is following the United States. Two trends are currently clashing, not necessarily compatible. The first, inspired by the American model, consists of designing stadiums where the spectator experience is constantly reinforced. In the United States, people pay a lot of money for their tickets, and in exchange they want a spectacle, not just a sport. The stadium is not isolated, it is surrounded by a whole environment, particularly commercial. The other trend, more European, is towards cost-controlled stadiums with a strong heritage.

Is there a stadium today, among the most recently built, that best embodies this latter trend?

Our future Red Star stadium in Saint-Ouen, in the Paris suburbs. It was designed to play a driving role in the development and attractiveness of the city. It is a major player, the catalyst for a vast urban programme. The stadium is anchored in the city and open to the city. For example, it has 30,000 m2 of mixed-use space. With this example, we are trying to show that it is possible today to build stadiums that will become parts of a city. The concept can be adapted to all sizes and demands.