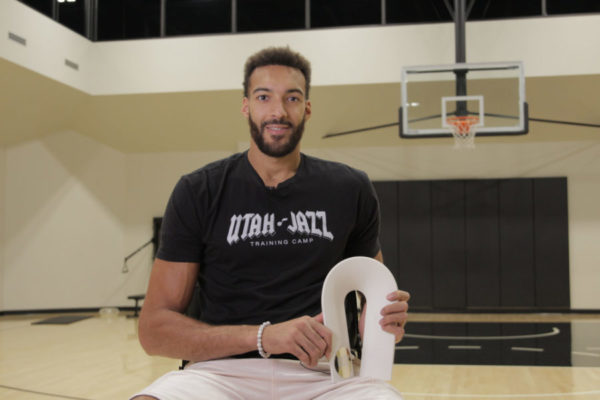 The event has become a ritual. Every year at this time, the Monegasque organisation Peace & Sport awards its annual trophies. For the second consecutive edition, the award ceremony took place in virtual mode.

The 2021 edition comprises five trophies, the winners of which were unveiled at the rate of one per day, between 7 and 11 December. At the end of the list, one of the most eagerly awaited trophies was the Peace Champion. The Peace & Sport jury, composed of former athletes who are all members of the non-governmental organisation, awarded it to French basketball player Rudy Gobert (photo above). He succeeds three team sports figures who were awarded between 2018 and 2020: France’s Blaise Matuidi, South Africa’s Siya Kolisi and Argentina’s Lionel Messi.

Will 2021 be a vintage year for the peace through sport movement? What should we remember? Joël Bouzou, President of Peace & Sport, answered the questions of FrancsJeux.

FrancsJeux: Despite the health crisis, did 2021 advance the cause of peace through sport?

Joël Bouzou: Today we can see that governments are becoming more aware of this issue. More and more governments are considering sport as a tool for solidarity, inclusion and education. The health crisis has not helped, as it has kept many people away from sport, but the phenomenon is now solid enough to have resisted. Peace & Sport’s Carton Blanc operation on 6 April, the International Day for Development and Peace through Sport, reached 170 million people in 117 countries this year. This is our best result ever. Now we need to get people back into sport around the world.

Did the Tokyo Games help the cause?

Yes, they did, despite the doubts and the situation. The Tokyo Games allowed us to talk about sport, but to talk about it in a way that is often unique to the Olympic event. One of the most memorable was a judo match between an Israeli woman, Raz Hershko, and a Saudi Arabian woman, Tahani Alqahtani. The two women faced each other on the tatami. At the end of the fight, they shook hands. In other times, the fight would not have taken place. The IOC should be congratulated for making such an event possible. The International Judo Federation and its President, Marius Vizer, should also be recognised for all their hard work. They never lose sight of what can be done not only for sport, but also by sport.

A growing number of international federations have developed programmes focusing on peace through sport. Hasn’t the health crisis, and its economic consequences, led them to sacrifice these initiatives in favour of other priorities?

I don’t think so. Led by the IOC, which added the word “Together” to the motto of the Games this year, the Olympic movement has understood that sport is becoming an important pillar of stability in societies. The Olympic Truce has just been signed. The issue of peace through sport is becoming more and more mature. It will now move down from the international federations to the national federations. In the future, the bodies will not only have to take into account the high level and performances to be considered in the sports movement. They will also have to integrate issues of solidarity, inclusion, respect…

Does this also apply to athletes?

It certainly does. The profile of the champion is changing. And it will continue to evolve. To be considered a champion, an athlete can no longer just break a record or win a medal. They must have a social impact. The World Olympians Association (Joel Bouzou is also its president) is increasingly developing programmes to help athletes serve society, especially young people.

Does Rudy Gobert, winner of the Peace & Sport Champion of Peace award for 2021, fit into this new model?

Yes, he has opened a foundation, Rudy’s Kids, for children. It develops programmes on health, education and citizenship. Through this initiative, Rudy has a direct impact on the lives of the young people helped by his foundation. He is also involved in supporting a Rwandan association for sportswomen.

The Peace and Sport Awards winners for 2021: