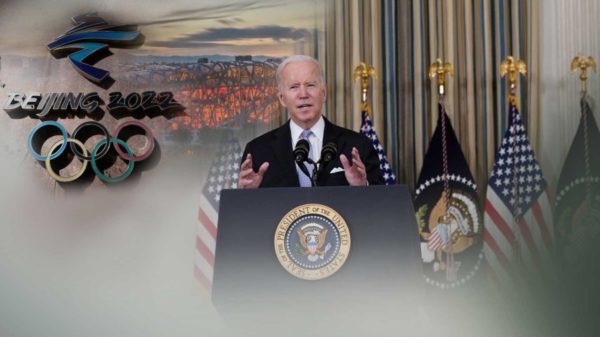 The threat has been in the air for more than two weeks. It is now a fact. The United States will not send any official delegation to the Beijing 2022 Winter Games next February. Joe Biden has drawn the weapon of a diplomatic boycott of the Olympic and Paralympic event, which the White House has been talking about since last month.

The American decision is motivated, according to the official discourse, by the “genocide and crimes against humanity underway in Xinjiang”. It does not explicitly refer to this, but is primarily concerned with the Beijing regime’s treatment of the Uyghur community.

White House spokeswoman Jen Psaki explained to the media: “By going to the Beijing Games, the U.S. diplomatic representation would be treating the Games as if nothing had happened, despite China’s gross human rights violations and atrocities in Xinjiang. And we simply cannot do that.

In reality, the US administration’s decision will have no direct effect on Team USA athletes. The boycott is strictly diplomatic. It will result in the absence of US officials – elected officials, embassy representatives and White House envoys – from the Games. Competitors are not affected. They will participate in the events and will be able to march in the opening ceremony on Friday 4 February at the Olympic Stadium in Beijing.

Jen Psaki said. “The Team USA athletes have our full support. We will be behind them 100 per cent as we cheer them on from here.” Team USA is expected to have at least 200 athletes at the Beijing Games. It is shaping up to be one of the largest teams in the competition.

Unsurprisingly, the IOC was quick to react to Washington’s announcement. The Olympic body issued a short statement, very sober in its tone and words. The presence of government officials and diplomats is a purely political decision for each government, which the IOC, in its political neutrality, fully respects,” wrote the IOC. At the same time, this announcement also clearly shows that the Olympic Games and the participation of athletes are beyond politics, and we welcome this.”

The IOC takes the opportunity to recall that the traditional Olympic Truce was adopted last week in New York by the United Nations General Assembly. Its resolution calls on “all member states to collaborate with the IOC and IPC in their efforts to use sport as a tool for peace, dialogue and reconciliation in conflict areas.”

The Chinese were also quick to react to the US decision. Their reaction was in line with Beijing’s latest stance on the threat of a boycott. No invitation had been extended to American politicians,” insisted a spokesman for the Chinese embassy in the United States from Washington. This ‘diplomatic boycott’ comes out of nowhere. It is a political manipulation and a serious distortion of the spirit of the Olympic Charter.

According to the Chinese embassy in Washington, the American decision is a “pretentious act”, which will have no effect on the smooth running of the Beijing 2022 Winter Games.

With less than two months to go, the ball is now in the court of the Americans’ allies. Will they follow the path opened by Joe Biden?

Australia and Canada could quickly join the same camp and opt for a diplomatic boycott.

New Zealand announced on Tuesday 7 December, through its Deputy Prime Minister, Grant Robertson, its decision not to send diplomatic representation to the 2022 Winter Games. But Grant Robertson made it clear: this decision is purely a health one. It is in no way related to the position of the Americans.

Japan, for its part, will take its time before deciding the question. But Prime Minister Fumio Kishida explained on Tuesday that the decision will be carefully considered and will strictly reflect the Japanese position. The federal government will take into account the purpose of the Olympic Games, the diplomatic situation and the national interest of the country, said Fumio Kishida.