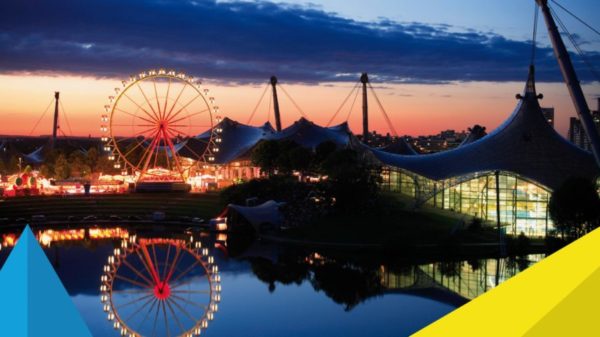 The year 2022 will be historic for the city of Munich. For two reasons. The capital of Bavaria will celebrate the 50th anniversary of its Summer Olympic Games, held from 26 August to 11 September 1972. A few days earlier, it will have hosted the second edition of the European multisport championships (11 to 21 August), the first in which all the sports on the programme will be brought together in one place.

At the heart of the event is the Munich Olympic Park. Built for the 1972 Summer Games, it will still be the setting, 50 years later, for some of the nine sports on the 2022 European multisport championships programme. Its managing director, Marion Schöne, answered FrancsJeux’s questions at the Smart Cities & Sport Summit, organised this week (22 to 24 November) in Copenhagen by the World Association of Olympic Cities.

FrancsJeux: What were the reasons for Munich’s decision to bid for the European Multi-sport Championships in 2022?

Marion Schöne: The reason is historical. In 2022, Munich will celebrate the 50th anniversary of the 1972 Summer Games. This is a very important date and event for the city. Most of the facilities used at the time are still standing and in working order. At the top of the list is the Olympic Park. We were keen to mark this anniversary by hosting a major sporting event in Munich, ideally a multi-sport event. We seized the opportunity that presented itself with the European Championships. The celebration of the anniversary of the 1972 Games will not only be sporting. The programme will also include cultural and architectural events. But the European Championships will be the highlight.

How will you celebrate the 50th anniversary of the Munich Games in the context of such a multi-sport event as the European Championships?

Have you built any new facilities for the 2022 European Championships?

No. The vast majority of the competitions will take place at the venues of the 1972 Munich Games. Athletics and gymnastics will be held at the Olympic Park, in the facilities built half a century earlier. Table tennis will be held in the same hall that was used for team sports, volleyball, handball and basketball. Rowing will be held on the water surface built outside the city, also for the 1972 Summer Games. Of the sports on the programme of the European Championships, which were present in 1972, only track cycling will have a non-Games venue. We will use a convention centre.

How have you managed to keep the facilities in good condition and still able to host international competitions half a century after the 1972 Games?

The Olympic Park is managed by a company whose sole shareholder is the City of Munich, which owns 100% of the park. The city has invested regularly over the past 30 years to renovate the facilities and keep them up to date. The Olympic gymnastics hall, for example, was renovated in 2007. The Olympic Stadium was modernised for the 2009 World Athletics Championships. This facility is not only used for sports, but also for cultural events. In 2009, half a million spectators attended concerts in the stadium in one year. The Olympic Park facilities are not the most modern in the world, but they are still used.

What do you expect from the European multi-sport championships in 2022? What impact can they have on the city of Munich?

We have a sustainability objective. We hope that the European Championships will demonstrate that it is possible today to organise a high-level event of significant size using existing venues. The Ministry of the Interior and the German Olympic Committee have jointly developed a concept for major sports events that are environmentally friendly, cost effective and do not require new construction. The European Championships are part of this approach. They can also strengthen the interest and support of the German public with a view to a future Olympic bid.

Could Munich 2022 be a preparation for an Olympic bid?

Perhaps. For the summer, the next edition to be awarded by the IOC is for the Games in 2036. But that would not be a good date for Germany. It would coincide with the 100th anniversary of the Berlin Games in 1936 and would bring back too many bad memories. But Munich has been a candidate twice recently for the Winter Games. For 2018, it was beaten by PyeongChang. For 2022, a referendum prevented the project from going ahead, but the no vote narrowly won. At the time, the Mayor of Munich explained that he would have liked the city to be the first to host both the Winter and Summer Games.