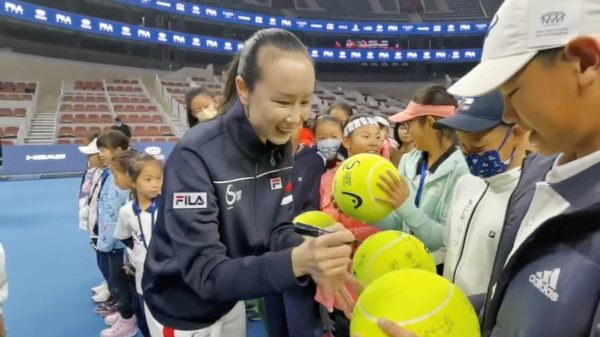 It’s a bad time for the IOC. The Olympic body made news earlier this week by publishing a photo of a meeting between its president, Thomas Bach, and Chinese player Peng Shuai, who was reported missing for 20 days after she accused a senior Chinese Communist Party official of rape. But her “scoop” has now backfired.

On Tuesday 23 November, Human Rights Watch directly accused the IOC of complicity with the Beijing regime in a case that is now global in scope. According to the NGO, Thomas Bach would certainly have made it possible to know that the Chinese player was alive and in good health. But the nature of their exchange, as reported in the official statement of the body, did not convince anyone. Its shortcomings, above all, raise questions about the role of the IOC and its position on the issue of human rights in relation to China.

For Sophie Richardson, the China director of Human Rights Watch, the IOC showed a “remarkable lack of judgment” in its handling of the Peng Shuai case. Thomas Bach is even guilty, in her view, of “active complicity” with the Beijing regime.

“The IOC has shown over the last few days how desperately it needs to keep the Beijing Winter Games on track, no matter what the human cost,” Richardson suggested in an online press briefing.

What is the criticism of the IOC and Thomas Bach? Their shortcomings, for the most part. The conversation between the leader and the Chinese player was presented in the IOC press release as a friendly exchange of courtesies and smiles. Peng Shuai thanked the IOC for their concern for her condition. Thomas Bach expressed his satisfaction that she was in good health, before inviting her to dinner on the occasion of the Beijing Games.

Nice. But the IOC did not address any of the real issues in the case. At no point was there any mention of Peng Shuai’s accusations of sexual assault against former Chinese Premier Zhang Gaoli. Thomas Bach did not ask the player if she had been given a lawyer and wanted to press charges. Nor did he ask whether she was being monitored or pressured.

Let’s be clear: the opposite would have been surprising. With less than 100 days to go before the opening of the Beijing Games, it was difficult to expect the IOC to take a critical stance against the Chinese regime. The presence of Chinese IOC member Li Lingwei, a multi-faceted leader of the Olympic movement in her country, in addition to Thomas Bach and Finnish Emma Terho, the Chair of the Athletes’ Commission, suggests that the video exchange with Peng Shuai was conducted under Chinese control.

Obviously, it did not convince anyone. Starting with the WTA. The Women’s Professional Tennis Association, which went on the offensive in the Peng Shuai affair after a suspiciously wait-and-see attitude, said that the recent images of the Chinese player in public and her video conversation with Thomas Bach did not alleviate its “concerns” about her. In particular, the WTA notes that the exchange with the IOC president does not say much about Peng Shuai’s “ability to communicate without censorship or coercion”.