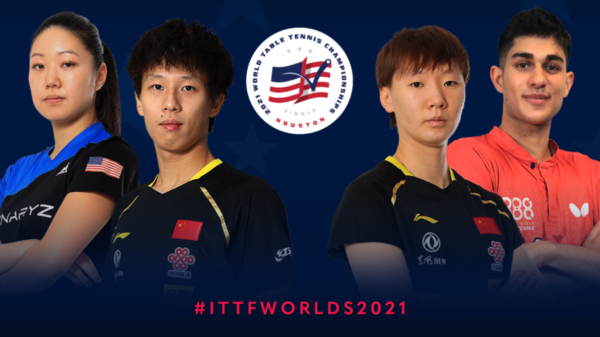 The location may seem unlikely, but history will be made twice this week at the World Table Tennis Championships. In Houston, Texas. The first global table tennis event of the new Olympiad, held from 23 to 29 November at the George R. Brown Convention Center, will be marked by a double event.

The first will take place behind the scenes. The International Table Tennis Federation (ITTF) will be holding a congress to elect a new president. The outgoing president, the German Thomas Weikert, who was outvoted by the executive committee, has thrown in the towel and is not seeking a new mandate. In his absence, the result is known in advance. Petra Sörling from Sweden is the only candidate for the top job.

Barring an earthquake, she will be elected president. The Scandinavian leader will become the first woman to chair the body since its creation. Petra Sörling will join two other women, Spain’s Marisol Casado (triathlon) and another Swede, Annika Sörenstam (golf), in the still very narrow circle of female presidents of an international federation of a summer Olympic sport.

The other event will take place on the competition field. At the table. The ITTF announced it on Monday 22 November with a drum roll: China and the USA will team up in the mixed doubles table at the World Championships in Houston. As table tennis rules allow the combination of players from different countries, Chinese players Lin Gaoyuan and Wang Manyu will compete with Americans Lily Zhang and Kanak Jha respectively.

Two Chinese-American mixed doubles in Texas for a world championship just one week after the virtual summit between Joe Biden and Xi Jinping. There is nothing anecdotal about this event. As the ITTF explains on its website, these two pairs will help celebrate the 50th anniversary of “Ping Pong Diplomacy” in the playing field over the next few days.

A look back. At the 1971 World Table Tennis Championships in the Japanese city of Nagoya, a young player from the American team, Glenn Cowan, got on the wrong bus to reach the delegations’ hotel. He mistakenly boarded the Chinese table tennis bus. Zhuang Zedong, the best Chinese player at the time, greeted him with a few words of welcome translated by an interpreter. The incident was captured by the few photographers present. It went down in history.

In Beijing, Mao Zedong was informed of the anecdote, which became the topic of conversation at the Nagoya World Championships. The President of the People’s Republic of China then decided to issue a very official invitation to the American table tennis team to visit China. The invitation was accepted. And the “diplomatic ping pong” was born.

The American table tennis players went to China in April 1971 for a tour of the country and a series of friendly matches. The first visit of an American delegation to Beijing since 1949. History records that it prepared for US President Richard Nixon’s trip to China in 1972.

According to Liu Guoliang, the president of the Chinese Table Tennis Association (CTTA), the idea of having two Chinese-American pairs at this year’s World Championships in Houston came from the Chinese. It was not prepared. A few days ago, when the Chinese team arrived in Houston, I was very moved by the efforts of the ITTF, USA Table Tennis and the Houston Sports Authority to organise a sporting event during the pandemic,” he explained, as quoted by the ITTF. We thought about how we could build on the friendship between China and the United States, which was started by our predecessors 50 years ago, and strengthen it on the sporting field. Then we approached the US federation and proposed to the ITTF the idea of combining Chinese and American players for mixed doubles.”

On paper, the pairing of China’s Lin Gaoyuan, currently number 7 in the world in singles, and American Lily Zhang, her country’s top doubles player, has all the assets to win. “And she speaks Mandarin, which will help us,” said the Chinese table tennis player. By winning the world title, they too would be making history.