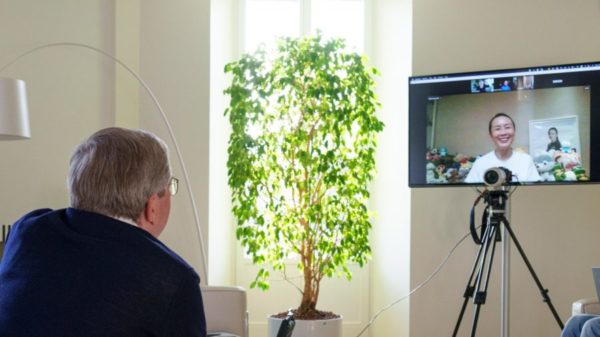 Who would have believed it? The IOC, which has been very discreet since the beginning of the affair, got a scoop on Sunday 21 November in the twists and turns of the Chinese tennis player Peng Shuai. The IOC President, Thomas Bach, spoke to the young woman by video conference for about 30 minutes. This was the first conversation with the world’s most wanted sportswoman since she disappeared from the radar in early November.

The conversation between Thomas Bach and Peng Shuai was then the subject of a short press release issued by the IOC at the end of the day. The Olympic body explained that its president was not alone in his long-distance talks with the Chinese player. He was accompanied by Emma Terho of Finland, the Chair of the Athletes’ Commission, and Li Lingwei of China, an IOC member and former Vice-President of the Chinese Tennis Federation.

The content? Smooth. Much too smooth to really know more about Peng Shuai’s real situation since her accusations of rape against a former senior Chinese Communist Party official, Zhang Gaoli, posted on the social network Weibo on 2 November.

In its statement, the Olympic body explains that the young woman began the conversation by “thanking the IOC for its concern for her well-being.” She then assured the IOC that she was safe and healthy, living at home in Beijing, but wanted her privacy respected for the time being. That is why she prefers to spend her time with her friends and family,” the IOC statement continued. Nevertheless, she will continue to be involved in tennis, the sport she loves so much.”

The only image of the interview published by the IOC illustrates the tone and the words of the player. Peng Shuai appears on screen with a huge smile on her face, clearly at home, surrounded by an impressive collection of stuffed animals.

I was relieved to see that Peng Shuai was doing well, which was our main concern,” added Emma Terho, again quoted by the IOC. She seemed relaxed. I offered her our support and offered to stay in touch at any time, which she obviously appreciated.”

In its press release, the IOC goes so far as to specify that Thomas Bach concluded the thirty-minute exchange with the former world number 14, winner of the French Open in 2014, with an invitation to dinner “as soon as she arrives in Beijing next January, which she accepted with pleasure”. A dinner where Emma Terho and Li Lingwei will also be invited.

The videoconference between Thomas Bach and Peng Shuai concluded a day that began with a short video posted on Weibo, the Chinese social network, showing the young woman attending a youth tournament in Beijing in the morning. It was published by the competition organiser. It was the first, presumably authentic, footage of Peng Shuai in public since her sexual assault allegations were made public and she suddenly disappeared.

Make no mistake about it: the IOC created the event with this live exchange with the Chinese player. The Olympic body has provided a form of response to the questions raised over the past three weeks by her disappearance. Peng Shuai is alive and well. The question no longer arises. Thomas Bach was the first foreign official to speak to her. He was ahead of the leaders of the WTA (Steve Simon, the general manager) and the International Tennis Federation (David Haggerty, the president).

A good move, then. At least in terms of media coverage. But the IOC press release does not shed any light on Peng Shuai’s situation since her revelations, except that she is in good health. Is she being held against her will in her Beijing residence? Is she under close surveillance by the Beijing regime? Probably.

One thing is certain: the interview between Thomas Bach and Peng Shuai is especially good for the Chinese authorities. By giving the IOC the “scoop”, Beijing has partly removed a thorn from its side without fear of a diplomatic incident.

In its press release, the Olympic body made no mention of the young woman’s accusations of rape. Nor did it mention the name of Zhang Gaoli, her alleged attacker. Finally, it did not ask China about the existence of an ongoing investigation against the former member of the political bureau of the Chinese Communist Party.