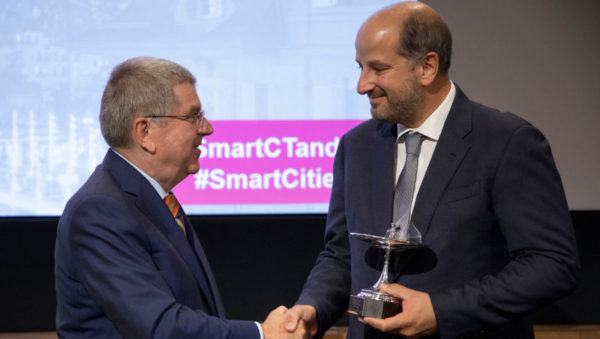 Tokyo, Beijing, Paris and Los Angeles were already among them. But the list of Olympic cities continues to grow. Milan will add its name in 2026. In the same year, Dakar will become the first from the African continent, after hosting the Summer Youth Games. Six years later, Brisbane will join the circle.

The eighth edition of the Smart Cities & Sport Summit will bring them together next week (22 to 24 November 2021) in Copenhagen. The hybrid summit, in which Thomas Bach will be one of the first speakers, is organised by the World Union of Olympic Cities. Its president, Grégoire Junod, mayor of Lausanne (pictured above, with Thomas Bach), answered questions from FrancsJeux.

FrancsJeux: You will be, with Thomas Bach, one of the first speakers at the Smart Cities & Sport Summit in Copenhagen. What message would you like to convey to the representatives of cities around the world, including the Olympic cities?

Grégoire Junod: The Copenhagen Summit will be one of the first opportunities for us to meet, in real life, all together in one place. This is very important. We are going to talk about sport and health, about the place of sport in a city and how it can contribute to improving the lives of the inhabitants. The community of Olympic cities is increasingly aware that sport is becoming a tool for public health policies. It is a powerful instrument for inclusion, integration, sustainable development… For a municipal team, sport now goes far beyond the mere provision of sports facilities. In Copenhagen, we will explore the theme of healthy sport and how sport can contribute to the future of our cities.

Lausanne became an Olympic city at the beginning of last year, on the occasion of the 2020 Youth Winter Games. What impact did the event have on the life of the city and its inhabitants?

The impact has been extraordinary. Even the most optimistic could not have imagined that the 2020 YOG would bring together 650,000 people, with the women’s ice hockey round of 16 matches sold out! This event showed the desire of people to get together around sport. But the pandemic came on very quickly after the end. And it broke the momentum of the Games. The YOG were to be followed in Lausanne by the World Ice Hockey Championships. They were cancelled. In people’s minds, the legacy of the Youth Games was partly erased by the health crisis. We will have to put a lot of energy into rekindling this flame. But there is still a legacy in terms of infrastructure, with a new ice rink and high-level cross-country skiing facilities.

Lausanne 2020 opted for a low-cost event, with modest dimensions and no major works. Do you feel that you have opened a new path for the Olympic movement?

We organised a more sustainable Games, with free competitions and massive use of public transport, including for the athletes. Such an option is easier to choose for a Youth Games, but it was nonetheless new. We were also innovative in proposing a cultural and sports festival around the Games. I think we showed that it was possible to build an event with a large audience without increasing costs and CO2 emissions. The YOG in Lausanne was virtuous, close to the population and sustainable. In this respect, they were a very good laboratory for the Olympic movement.

Did the Youth Games make you want to go even further, by hosting major sports events in the future?

They have reinforced Lausanne’s desire to host major events, that’s for sure. We’re going to do it next summer, with the Tour de France cycling race. On this occasion, we are not going to be satisfied with simply closing the traffic. We are going to take advantage of it to propose cultural events and a promotion of cycling and soft mobility throughout the city.

Lausanne is the Olympic capital. How do you intend to further strengthen this label?

We are always keen to welcome new federations and international sports bodies. This desire was recently rewarded by UNESCO’s choice to set up its Women and Sport Observatory incubator in Lausanne. However, the city’s position as Olympic capital will also require another approach: taking advantage of the ecosystem of the international sports movement to generate economic activity. This can be done by hosting start-ups or incubators linked to sport and health. We have many assets for this, including the presence in the city or its surroundings of partners such as the Nestlé group and companies in the watchmaking sector.

The health crisis has led the Olympic movement to move to virtual mode for its meetings, congresses and sessions. Has this trend strongly affected the economic activity of Lausanne?

Yes. Lausanne is a city of business tourism, a large part of which is linked to the sports movement. The impact on hotel activity was very strong. We welcome with relief the resumption of the IOC’s activities in face-to-face mode. It is likely that the international federations will follow suit. But it is impossible to know at this stage whether everything will return to the way it was. The hotel and event industry will probably have to adapt.