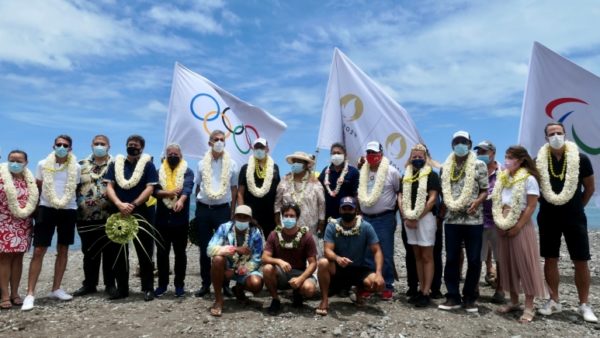 Visit in overseas for the organizing committee of the Paris 2024 Games. A delegation of the OCOG went last week (November 9 to 12) to Tahiti, in French Polynesia, where the Olympic surfing events will take place in less than 1,000 days.

At the head of the procession, Etienne Thobois, the director general of the Paris 2024 OCOG. He explained to FrancsJeux the reasons for this visit to the South Pacific, the first since the IOC officialized the spot of Teahupo’o as the site of surfing, one of the four additional sports of the Paris 2024 Games. And unveiled the projects of the OCOG and the Tahitian authorities for the success of the Olympic competitions.

FrancsJeux: What was the objective of this four-day visit to French Polynesia?

Etienne Thobois: There were many. We had not been back to Papeete since the bidding phase. It was important to see the local authorities again, but also the associations and the population of Tahiti. We took the opportunity to dispel a few preconceived ideas that had given rise to some concerns about the planned constructions and developments. We reassured everyone by reaffirming our philosophy of a temporary event. We also wanted to review the topographical conditions of the site and its technical opportunities. We visited it, by land and sea. Finally, it was important to engage the population around the Olympic project, bringing with us the three flags of the Games, Olympic, Paralympic and Paris 2024. A very moving ceremony (photo above) was organized for their presentation on the site of Teahupo’o, true to the values we want to convey. Two of the world’s best surfers, Michel Bourez and Jérémy Florés, were present to symbolize the involvement of the athletes.

With less than 1,000 days to go before the Paris 2024 Games, has the preparation of the surfing site and its environment begun?

It is already very advanced. A marina will be renovated. Its plans have been presented to us. A hotel complex located about fifteen minutes from the competition site will also be renovated. The building permits will be submitted very soon. The power supply and water purification, on the site, have been launched. The operation was planned independently of the Paris 2024 Games. The event has secured it. This visit gave us the opportunity to meet the organizing team of the Pro Tahiti, an annual stage of the world surfing championship. It is composed of people who are very experienced in hosting international events. The expertise already exists on site, and we are going to build on it.

What do the Paris 2024 Games really mean for the population of Tahiti, which is so geographically distant from the metropolis?

They are very concerned. A public meeting was organized on the second day of our visit, with representatives of the civil society. It was packed. More than three hours of very rich exchanges. The Tahitians are very happy and proud to welcome the Games, but with conditions. They are very attached to maintaining the way of life and the wild character of the site. We agreed with them very quickly on these issues. The next day, for the flag ceremony, everyone came.

How will the athletes, coaches and officials be housed during the Games?

We are currently studying the question of accommodation, but it will not be an obstacle. There are many guesthouses and rooms in private homes available, often used for Pro Tahiti. In addition, the hotel complex that will be renovated before the Games will have 200 beds. Within a distance of 10 km around the spot, we will have enough to accommodate everyone. But we will consult the athletes to determine the best options. They need to be close to the wave, to feel it. Michel Bourez will be our contact. Tony Estanguet will go to Tahiti in the first half of 2022 to finalize all this and sign the agreements with the Polynesian government and the communities. We also plan to open an OCOG office in Tahiti, to ensure coordination.

The surfers will live the 2024 Games very far from Paris and the rest of the events. How can we make sure they don’t feel like they’re just competing in Tahiti for a world championship?

We are thinking of all the ways to associate them with some of the great markers of the Games. The opening ceremony, for example. We want to install on the surfing site all the means so that they can follow the other competitions of the Paris 2024 Games from a distance. The idea is also to place the surfing in the first week, to allow the athletes who wish it to join their delegation to the village and live the continuation of the event in the heart of the action. We will do everything to differentiate ourselves from a world championship stage like the Pro Tahiti, so that the surfers feel the magic of the Games.

With such a distance, and a time difference of a dozen hours, is not surfing likely to be under-mediatized at the Paris 2024 Games?

I don’t think so. The television coverage will be provided by OBS (Olympic broadcasting services), in charge of the production of the images. The major news agencies will have correspondents. The entire surfing media community will be present. And we can think that the big countries of the discipline, like Brazil, the United States, France or Australia, will make the effort to foresee a media coverage on site. Today, we are more concerned about the organization of the work of the media on site, in terms of security and proximity to the wave, than about their absence at the time of the event.