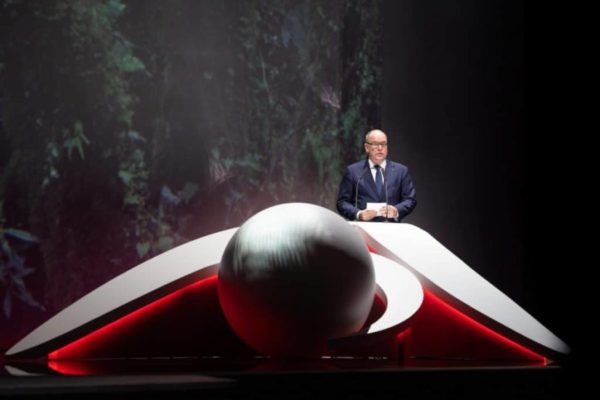 The event is not on any international sports calendar, but COP26 is proving to be the place to go this week for the Olympic movement. In Glasgow, the World Climate Conference will be attended by representatives of national and international bodies and organizations. Sport is invited in the debates. It is the talk of the town.

At the beginning of the week, a round table on Sport and Climate set the tone. Among the speakers, the director of environmental excellence of the OCOG Paris 2024, Georgina Grenon. After presenting the policy of Paris 2024 in terms of sustainability, she explained that the Organizing Committee was committed to halving its emissions by 2024 and completely offsetting them over the same period.

With less than three years to go before the event, Paris 2024 has set itself up as a leader in the class. It is even aiming to take the world by storm. The IOC has made a commitment through its president, Thomas Bach, to reduce its CO2 emissions by 50% by 2030. “We will achieve this goal six years earlier, for the Games of 2024,” assured Georgina Grenon.

On Wednesday, November 3, there was still a lot of talk about sports at COP26. But this time, the speech took another turn. Patricia Espinosa, the UN Executive Secretary for Climate Change, called the sports movement to action. She urged her organizations to translate their words and commitments into actions and initiatives.

Nearly 300 sports organizations are signatories to the Sport for Climate Action (S4CA) framework,” she said. We are now challenging them to reduce their emissions by 50% by 2030 at the latest, and then to achieve net zero emissions by 2040. They must also commit to submitting plans outlining the concrete actions that will be taken to implement the 2030 targets.” They will have to publish annual updates over the next eight years.

It is no coincidence that FIFA issued a statement on the same day detailing its climate strategy. The international soccer body also wants to be at the forefront. In Glasgow, it is represented by Isha Johansen, the head of Sierre Leone, a member of the FIFA Council. Gianni Infantino did not make the trip, but he spoke to the delegates via a pre-recorded video.

FIFA is committed to respecting the UN’s demands, a reduction of half of the emissions by 2030, then zero net emissions in 2040. It recalls having concluded an agreement with Qatar to organize next year a carbon neutral soccer World Cup. The terrain will be favorable, with the stadiums for the global tournament all concentrated in and around Doha. But the task will be far more complex for the next edition, which FIFA has awarded to the United States, Mexico and Canada, with thousands of miles to fly for teams, officials, media and spectators.

When it comes to sustainability, professional soccer is struggling to put the fine words of its international leaders into action. Last month, Manchester United was criticized on social media for flying its team to Leicester, only 85 kilometers away, for a Premier League match.

Another candidate for the honor roll of environmental excellence is the IOC. The Olympic body also promises to meet the UN’s climate expectations by 2030 and 2040. It has even set an intermediate stage, the Paris 2024 Games, where Thomas Bach announced a 30% reduction in emissions.

In Glasgow, the word of the IOC is carried by one of its historical members, certainly one of the most credible to venture into the field of climate and sustainability: Albert of Monaco (photo above). The Monegasque sovereign chairs the IOC’s Sustainability and Legacy Commission. Obviously, he knows his subject.

Invited to address the COP26 delegates, Albert of Monaco emphasized the number of sports organizations (270) that have signed the Sport for Climate Framework (S4CA). “A solid base to build on,” he suggested. But the former bobsleigh pilot, a long-time activist for saving the oceans, wants to go further.

This mobilization is a good start, but only a start,” he explained in Glasgow. We are in sport, we know we can’t rest on our laurels. We must always aim higher. In the current situation, where decisive action on climate is more urgent than ever, I call on even more sports organizations to join the framework and commit to meaningful action.”

Albert of Monaco reiterated: the next editions of the Olympic Games have all committed to being carbon neutral. “Starting in 2030, the IOC has mandated that all Olympic Games must be climate positive,” he insisted. The bar is high.