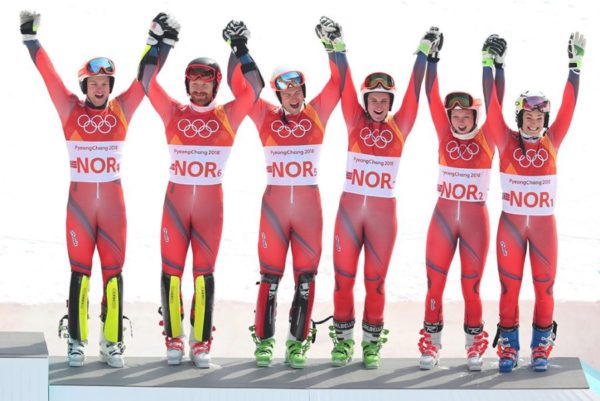 The scenery changes, but the positions remain. They are not moving, or not very much. With 100 days to go before the opening of the Beijing 2022 Winter Games (4 to 20 February), the American institute Gracenote has unveiled the latest version of its virtual medal table. Four years after the PyeongChang 2018 Games, it is still dominated by the same country: Norway.

Based on the most recent results from the main events on the international calendar (world and continental championships, World Cups), the Gracenote ranking has become an institution in the Olympic movement. It is never perfectly accurate, but rarely wrong by much. 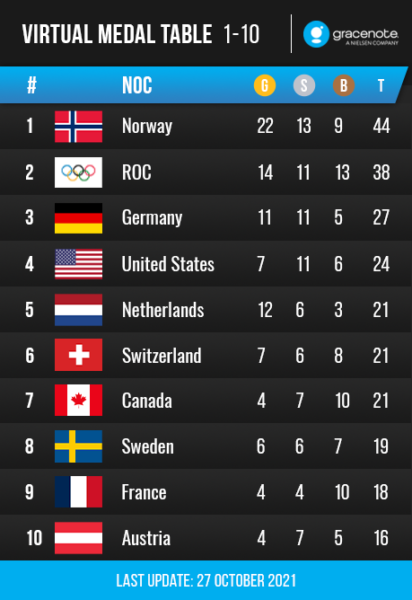 Its latest edition, for Beijing 2022, puts Norway, with a population of 5.4 million at the last count, at the top of the medal table. In PyeongChang 2018, the Scandinavians beat the competition with 39 medals, a new national record. For Beijing 2022, Gracenote promises them five more. Above all, Norway is expected to further increase its success rate, with a staggering 22 gold medals, half of its podium places. They won 14 at the PyeongChang Games.

Behind them, an intruder. Russia. The country is suspended from the Olympic movement until December 2022. At the Beijing Games, its athletes will march under a neutral banner. The delegation will wear, as it did last summer at the Tokyo Games, the name and colours of the Russian Olympic Committee (ROC). However, these clothing nuances will not prevent its athletes from taking second place in the medal table, according to Gracenote’s forecasts. Thirty-eight medals, including 14 gold. A great achievement. They had won only two titles at the 2018 PyeongChang Games, an Olympic edition where they competed under the name Olympic Athletes of Russia. According to Stanislav Pozdnyakov, the president of the Russian Olympic Committee, the ROC delegation is expected to number 216 athletes at the 2022 Beijing Games.

With Germany in third place (31 medals), Gracenote expects an all-European podium. This is unusual, even at the Winter Games.

At the 2018 PyeongChang Games, the United States and Canada fought it out for North American supremacy. Canada won. But the Beijing Games are expected to turn the tide, with a fourth place finish for the US and a seventh place finish for Canada. Historically, Canada has never surpassed Team USA in the medal standings at two consecutive Olympic Winter Games.

Its armada of long track speed skaters should once again provide the Netherlands with a gold medal haul. Gracenote gives them a virtual 12, for a total of 21 places on the podium. This is enough to put them in the top five for the third time in a row at the Winter Games.

With 18 medals, France would enter the Olympic top 10 (9th), but with only four gold medals, it would remain well away from the world’s major winter sports powers.

China? A mystery. Gracenote predicts only six medals, four of them gold. The host country should have a hard time making it into the top 10. But the American institute points out that the worldwide pandemic of COVID-19 has forced many Asian athletes to give up participating in the major events on the international calendar between the PyeongChang 2018 and Beijing 2022 Winter Games. As a result, there is a lack of data to position Japan, South Korea and China, in particular, on the world stage. As a result, the announced performances of these countries, led by China, may be quite underestimated.