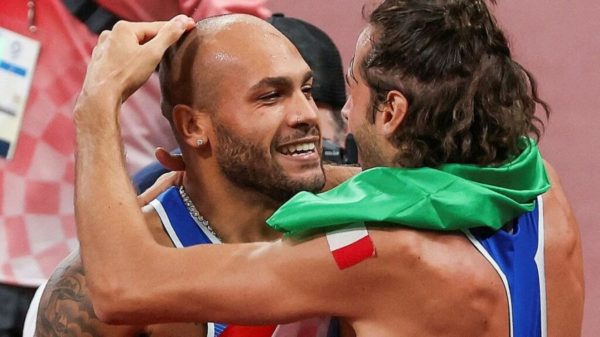 The long litany of awards and distinctions at the end of the year has barely begun in the Olympic movement, but it is already marked by controversy. It comes from Italy.

The Italian Olympic Committee (CONI) did not appreciate the absence of its two Olympic track and field champions from the list of nominees for the Male Athlete of the Year award published by World Athletics. Its president, Govanni Malago, said it out loud. He cried foul and spoke of a “lack of respect”.

At first glance, nothing to complain about. The casting reveals no lack of taste. In fact, it is one of the richest in recent years. All ten nominees are at least Olympic champions from the Tokyo Games. Most of them have also won the overall Diamond League ranking in their discipline. Two of them, Ryan Crouser and Karsten Warholm, added a world record.

But the Italians noted it and took it up: Lamont Marcell Jacobs and Gianfranco Tamberi (pictured above, from left to right) are missing. The sprinter and high jumper won gold at the Tokyo Games. Together with the racewalkers Massimo Stano and Antonella Palmasino, they contributed to the phenomenal and highly improbable Italian Olympic harvest: five medals, all gold. Amazing.

The absence of Gianfranco Tamberi is not scandalous. The Italian shared victory in the high jump final with Mutaz Essa Barshim of Qatar. His opponent was not among the nominees chosen by World Athletics either.

However, the omission of Lamont Marcell Jacobs raises questions. At the Tokyo Games, the Italian created the most striking surprise of the track and field events, winning the gold medal in the men’s 100m. He doubled his tally at the end of the competition by winning the Olympic title in the 4×100m. His time in the 100m final, 9.80 seconds, made him the fastest Olympic champion in history over the distance, apart from Jamaica’s Usain Bolt.

For Giovanni Malago, World Athletics made a mistake by “forgetting” Lamont Marcell Jacobs. “These two omissions are a lack of respect for our athletes,” suggested the CONI president, who is also an IOC member and president of the Milan-Cortina 2026 Winter Games organising committee. “This decision is deeply wrong. We are very upset about it”.

Nominees for the World Athletics Awards are selected by an international jury of experts from the continental confederations. A vote involving the board of the body, the athletics “family” and the general public will determine the three finalists. The voting has just begun. The Male Athlete of the Year will be announced at the World Athletics Gala in December.

Sebastian Coe, the president of the body, defended the choice of his jury of experts in his own way. “The annual World Athletics awards always recognise athletes who have performed at the highest level throughout the year, taking into account not only the Olympic Games but also the one-day meeting circuits,” explained the Briton.

Of course, Lamont Marcell Jacobs has been quiet in the Diamond League. He announced the end of his season shortly after the Tokyo Games, explaining that he was suffering from a knee injury, and gave up the lucrative post-Games meetings tour. But the Italian won the European indoor 60m title in March, proving that he was not a one-race man.

Was World Athletics’ decision to leave him off the list of nominees meant to signal its doubts about the credibility of his meteoric rise? The European Athletics Association (EA) did not feel the same way. It recently awarded its trophies for the year 2021. In the men’s category, the continental body named Norway’s Karsten Warholm ahead of Sweden’s Armand Duplantis… and Lamont Marcell Jacobs.