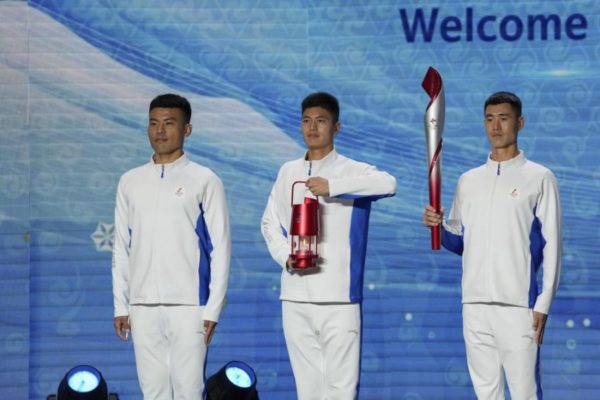 The Beijing 2022 Winter Games will not be the first to be marked with the COVID-19 stamp, but they are shaping up to be the strictest in terms of sanitary measures. When it comes to comparisons, Tokyo 2020 could well look like a quiet trip to the countryside.

The Olympic flame, lit two days earlier in Greece, arrived in China early on Wednesday morning. It was proudly presented as it stepped off the plane, looking sharp in its red lantern despite the long journey. At her side was a copy of the Olympic torch. The Chinese know a thing or two about ceremonies. They never do anything half-hearted or improvised.

A welcoming ceremony was then organised at the Olympic Tower, the emblem of the 2008 Beijing Summer Games. Then a dignitary of the regime, Cai Qi, the secretary of the municipal committee of the Chinese Communist Party, who is also president of the organising committee of the 2022 Winter Games, lit the cauldron.

So far, nothing very unexpected. But what followed was less festive. In the speeches, and especially in the announcements.

Zhang Jiandong, the vice-mayor of Beijing and executive vice-president of the organising committee, set the tone by explaining that the sanitary and safety of all participants was the top priority in the run-up to the Olympic and Paralympic Games. The Chinese then suggested that the torch relay would be reduced to its simplest form.

A relay, of course, made up of torchbearers in official uniforms, passing the torch to each other with precise gestures and smiles on their faces. But its length will be limited to just three days. It will begin on February 2nd, the day before the Games begin, and will end on Friday, February 4th, in the evening, during the opening ceremony.

A total of 1,200 runners will take part in the three days of this historically short relay, the shortest since the late 1960s for a Winter Games. On average, 400 lucky people will take part each day. As for the route, it will be reduced to the host cities of Beijing, Yanqing and Zhangjiakou.

The rest will be virtual. Whch is very trendy. Over the next few weeks, the Olympic flame will visit China, but in digital mode. The Chinese organisers did not enlarge on the details. All we know is that this new kind of relay, worthy of an sci-fi film, will be staged thanks to the prowess of virtual reality. Its organisers have planned WeChat sessions and a few promotional operations to encourage as many Chinese as possible to follow its progress.

With such a device, the Chinese are sending a message to the rest of the world: the Beijing 2022 Winter Games will indeed take place, but their sanitary bubble will be the most hermetic in history. By reducing the torch relay to just three days, a decision that the Japanese in Tokyo 2020 refused to make, they are foreshadowing an Olympic event dominated by an obsession of a zero risk policy.

The publication of the playbook, which will detail the sanitary measures imposed on accredited participants, is announced for the end of October. According to some sources, it could happen before the end of the week. The Chinese have not revealed anything about it yet, apart from the absence of foreign spectators and the obligation to be vaccinated, or be subject to a 21-day quarantine. But its content does not look good for the future participants.

As for the option of a closed-door environment on the competition sites, it has not been ruled out, even if the organisers continue to talk about the presence of an audience composed exclusively of Chinese residents. With just over 100 days to go, it seems increasingly difficult to imagine the Chinese reducing the torch relay to a digital version, while allowing spectators to crowd into the stands.