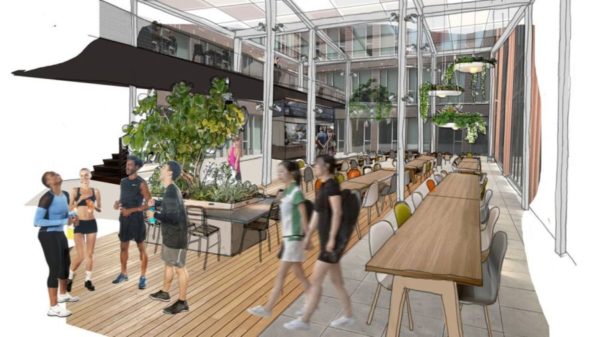 A new name was added this week to the list of the Paris 2024 OCOG partners. French company Sodexo has joined the Olympic and Paralympic adventure as an official supporter, the third level of the national marketing programme. Its subsidiary dedicated to sports events, Sodexo Live!, has won the contract for catering in the athletes’ village.

The stakes are high. For five weeks, Sodexo Live! will have to provide up to 40,000 meals a day for the 14,850 athletes of the 206 Olympic and 182 Paralympic delegations. The company will mobilise a thousand of its employees. Its managing director, Franck Chanevas, answered FrancsJeux’ questions.

FrancsJeux: You are already involved in the Tour de France and the French Open. Do the Paris 2024 Games represent a genuine special event?

Franck Chanevas: The Games are unique. The values of Olympism are very present. The nature and composition of the delegations are very different from a Tour de France, for example, where we are dealing with professional teams. The approach is less commercial. In Paris 2024, the village will host nearly 15,000 athletes, between the Olympic and Paralympic Games, over a relatively short period of time. The village will not just be an accommodation for all these delegations, but a place to live.

What difference does this make to the catering in the village?

We will have to meet two expectations: food that is perfectly adapted to the requirements of high-level sport, and catering that brings pleasure. In the village, the athletes live, relax, celebrate their performances… Meals are not just a time to eat. They are sometimes more. To meet these two expectations, we have called on four chefs. Three will be assigned to the village itself, the fourth will work on the liner that we plan to install on a bank, opposite the village. With them, we will offer the athletes inventive, gourmet and cultural cuisine.

What role will this boat play in the athletes’ village?

This will be a first for an Olympic village. It is a response to our desire to offer athletes a little more than just a classic food source. The liner will be fitted out as a French-style brasserie, with 250 seats. It will offer pleasure cuisine, a place to relax, to celebrate a performance for example.

Has catering for top-level athletes changed a lot in recent years?

It has become much more professional. Sports clubs and organisations are placing increasing emphasis on nutrition. It is becoming a performance tool. To meet their expectations, we have been working in depth for several years now, refining our expertise. Today, when we present our offer to a sports organisation, we think in terms of performance.

The Summer Games bring together 206 delegations, and therefore almost as many cuisines. Are you going to offer the athletes such a universal choice?

No. It is not possible to offer and deliver 206 different cuisines. But, with our chefs, we are going to prepare world cuisine. It will be inventive, plural and cultural.

Will the menus be identical from the first to the last day of the Games?

No. We have planned a large rotation of the menus. But diversity will not only come from the range of dishes. We are also going to diversify the ways of eating. The athletes will be able to go to the cafeteria or the ship’s brasserie. They will also be able to choose a “grab and go” formula, to bring back a salad, a sandwich or a dessert, for example.

Unlike the competition venues, you will not have a test event in the village to test your device. How will you ensure that you are ready when the athletes’ village opens?

In our offer, we have respected Paris 2024’s commitments, its DNA, in terms of sustainability, heritage and transmission. The OCOG favours existing sites. So do we. So we are not going to build a kitchen in the village that would only function for the duration of the Olympic and Paralympic Games, i.e. only a few weeks. We will optimise Sodexo’s existing infrastructure and production facilities, which are often underused at this time of the year. We will deliver the catering, which is the least complicated aspect of the arrangement. So we won’t need to break in and test new, complex equipment.