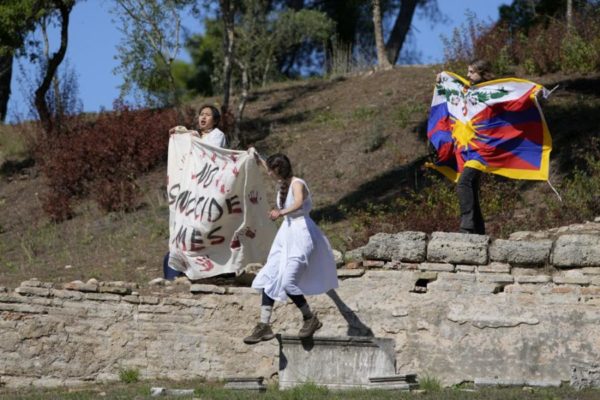 The trains are arriving on time in the Olympic movement. The sanitary crisis does not change anything, just modifies a few lines in the scenario. As announced, expected and feared, the traditional lighting ceremony of the Olympic flame on Monday, October 18th in Olympia was disrupted by human rights activists. This is a habit whenever China and the Olympic Games are associated in any way.

The day before, the rehearsal of the ceremony had already been disrupted by the intrusion of two Tibetan activists, who were quickly brought under control by the Greek police. On Monday, October 18th, three activists thwarted the security measures around the Temple of Hera, the site of the flame lighting ceremony.

The three intruders managed to slip in. They ran with long strides towards the torch, clearly intending to invite themselves to a scene worthy of a peplum, holding up a banner that read “No Genocide Games.”

The police were prepared for this. The demonstrators were tackled to the ground, removed from the stage and taken into custody. One activist commented, “How can Beijing be allowed to host the Olympics when it is committing genocide against the Uighurs?”

The incident had been anticipated. It came as no surprise to anyone among the few attending guests at the torch-lighting ceremony. Thomas Bach, the IOC President, and Katerina Sakellaropoulou, the President of the Hellenic Republic, had expected it.

According to several sources, other demonstrators were arrested by Greek police before they could reach the archaeological site.

Unsurprisingly, the Olympic body did not mention the incident in its official statement after the ceremony. Instead, it emphasised the “symbol of peace, unity and solidarity” of the Games’ flame.

In his speech, Thomas Bach recalled that the Games should be “respected as a politically neutral ground”. The IOC President insisted: “In our fragile world, where divisions, conflicts and mistrust are on the rise, the Olympic Games always build bridges. They never build walls”.

Becazuse of the sanitary crisis, the lighting ceremony took place without any spectators, except for a few uninvited guests. The traditional torch relay across Greece was cancelled for the same reasons.

The torch relay was reduced to a bare minimum this year. A Greek skier, Ioannis Antoniou, already chosen as the first torchbearer for the Sochi 2014 Winter Games, handed the torch over to a Chinese speed skater, Li Jiajun, a five-time short-track medallist at the Nagano 1998, Salt Lake City 2002 and Torino 2006 Games.

The rest will similarly be minimalist. The Olympic flame will be officially handed over to the Chinese on Tuesday, October 19th, at the Panathenaic Stadium in Athens. It will then be taken on board a flight to Beijing. A welcoming ceremony is scheduled for Wednesday, October 20th, in the Chinese capital. The flame will first be displayed to the public at the Olympic Tower in Beijing, before going on a presentation tour.

There is still one major unknown: the relay of the Olympic flame in China. To date, the organisers have not revealed much about it. Will it even take place? The IOC explains very diplomatically in its press release that “further information will be announced by the Beijing 2022 Organising Committee after the welcome ceremony on October 20th”. Mystery remains all down the line.