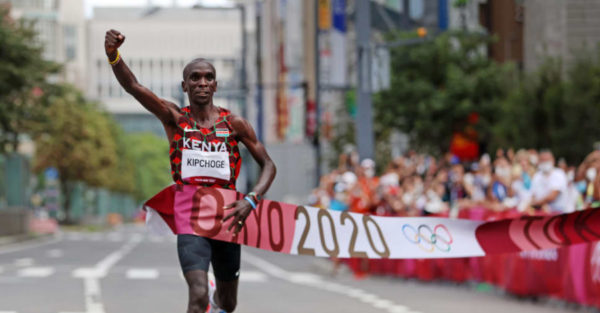 Classy. Very classy. The Paris 2024 OCOG will have a prestigious guest on Sunday, October 31st, a day marking the symbolic date of D – 1000 days before the opening of the Olympic event.

Eliud Kipchoge will make the trip to the French capital. In his bag, a pair of running shoes. The two-time Olympic marathon champion, the first man to run under two hours (in an unofficial race), will take his stride on the Champs-Elysées. At a steady pace, for 5 km of a new kind.

On the starting line, in addition to the Kenyan runner, 2,000 amateur participants. Several hundred race numbers are at stake for the Paris 2024 “Marathon for All”, which will be held alongside the Olympic event, on an identical course. They will be given to all the participants who will cross the finish line of this 5 km race before Eliud Kipchoge.

An important detail: the race will be run by handicap. The participants will be divided into starting locks, according to their entry time, with the slowest starting first, followed by the fastest. Eliud Kipchoge will start last, with a time penalty. He will have a dedicated lane.

The challenge is simple: to complete the 5 km without being caught by the Kenyan. The world marathon record holder prefers longer efforts, but he has a personal best of 12 minutes 46 seconds 53 over 5,000m, set on the track in July 2004 in Rome. Strong.

The Kenyan runner commented: “This unique race is a reflection of what running is: accessible to all. On one of the most beautiful avenues in the world, I challenge you not to let me catch you”.

How many people will cross the finish line before him? A few hundred, according to estimates. Half a thousand, perhaps. But each of them will have earned their day, leaving with a bib for the Paris 2024 “Marathon for All”.

Another clarification: the challenge is reserved for members of the Paris 2024 Club only. At the last count, there were over 235,000 members. The 2,000 runners invited to challenge Eliud Kipchoge will be among them. They will be selected by drawing lots at the end of a challenge proposed by the Paris 2024 OCOG between October 13-19th.

Launched on July 26th, 2020, the Paris 2024 Club is part of the legacy of the Games in France. It is intended to be the general public’s counterpart to the Terre de Jeux 2024 operation, dedicated to local authorities. In both cases, the ambition is the same: to extend the adventure of the Paris 2024 Games beyond competition venues. Engage the French municipalities and population behind the project.

The Paris 2024 Club has already offered its members the opportunity to challenge some of the champions on their own turf: a basketball court for Tony Parker, a swimming pool for Florent Manaudou, a ping pong table for Simon Gauzy… It took two privileged people on board the Patrouille de France for a flight over Paris on Sunday, August 8th, during the ceremony to hand over the flag to the Tokyo 2020 Games.

Since it was launched, it has invited its members to accumulate points through regular physical activity, quizzes on Olympism, online games, sponsorship or bonus codes. By the end of 2023, members will need to have accumulated at least 100,000 points to enter the draw for the “Marathon for All” bibs for the Paris 2024 Games.