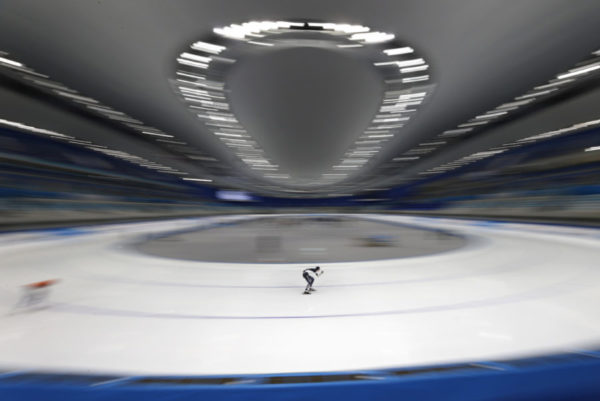 The countdown to the opening of the Beijing 2022 Winter Games displays 116 days, as of Monday, October 11th. Sixteen weeks and four days. A pittance for an event for which preparations began almost seven years ago.

But with less than three weeks to go before the symbolic date of D – 100 days before the lighting of the flame, one question remains unanswered: will the Beijing 2022 Games be the second in history to be held behind closed doors?

The Chinese say the opposite. Of course, they left the possibility of receivin foreign spectators out of their roadmap. The decision is official. It was announced by the IOC, for the Olympic and Paralympic Games. But the organisers continue to talk about the presence of an audience composed exclusively of Chinese residents.

The only problem is that they have not started selling tickets yet. Another indication of a closed-door scenario is that the pre-Olympic events currently taking place on the competition venues are being held in front of empty stands.

The test events for the 2022 Beijing Games, long delayed because of the pandemic and the country’s closure, began last week. They are due to continue until the end of October. In total, around 2,000 athletes, team officials, judges, referees and timekeepers are expected in China, in the three clusters of Beijing, Yanqing and Zhangjiakou. The code name for the series is “Experience Beijing”. Quite a programme.

Chinese, South Korean and Dutch skaters are on the bill. Twelve events, contested over 500, 1,000, 1,500, 3,000 and 5,000m, plus a team pursuit and a mass start race. A real test for the Beijing “Ice Ribbon”, but also for the preventive measures against the virus prepared by the Chinese.

First lesson: the organisers preferred to hold the event behind closed doors. As a precaution. But how can we not see this as a sign of what could be decided in less than five months for the Winter Games. The three days of the China Open were held in front of empty stands.

For the rest, the scenario unfolded during the competition repeated what was done at the Tokyo 2020 Games. An opaque and flawless sanitary bubble, with mandatory masks for all accredited persons. The media had to provide a negative PCR test less than 48 hours before entering the site. Interviews in the mixed zone were conducted remotely, in virtual mode. On the podium, athletes were asked to put their medals around their necks themselves.

“We cut the venue into two distinct parts, the inside and the outside of the loop,” explained Wu Xiaonan, president of the National Speed Skating Oval. “Inside, everything was closed, with no access for unauthorised people”. A foretaste of the Beijing 2022 Winter Games. An almost exact copy of the Tokyo 2020 Games. Only stricter and more rigorous.