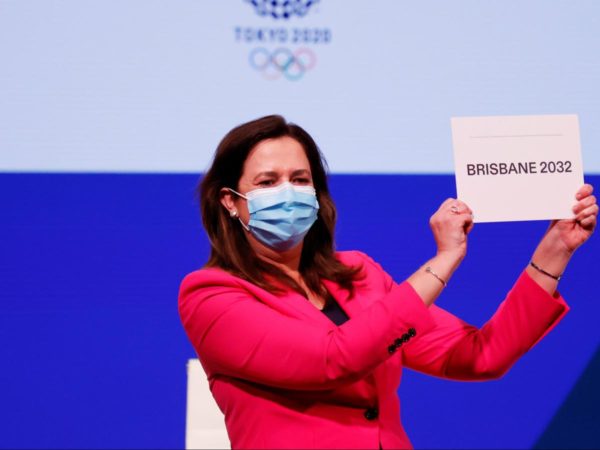 Is this an unsuspected effect of the sanitary crisis? With more than a decade to go before the event, the IOC seems to want to deal with the Brisbane 2032 file without letting time slow down its pace. At full speed. Chosen at the Tokyo session last July, the Australian city already knows the names of the members of the commission that will inspect its preparation over the next eleven years.

The IOC announced it on Thursday, October 7th, via a press release: the Brisbane 2032 Games Coordination Commission will be chaired by former Zimbabwean swimmer Kirsty Coventry. At 38 years of age, the double Olympic champion in women’s 200m backstroke (Athens 2004 and Beijing 2008) confirms her growing influence within the Olympic body.

Elected by her peers at the London 2012 Games to sit on the Athletes’ Commission, Kirsty Coventry took over the chairmanship in 2018. In this capacity, she joined the Executive Board. She should have given up on her membership within the Olympic body in the evening of the Tokyo 2020 Games, like the other athletes elected at London 2012 (including Frenchman Tony Estanguet, President of the Paris 2024 OCOG). But the IOC Session in Tokyo approved her status’ change. She thus became an individual member, without any time limit.

She is now at the head of the Coordination Commission for the Brisbane Games in 2032. The position is an important one. For the Paris 2024 Games, the IOC had chosen the Belgian Pierre-Olivier Beckers. For Los Angeles 2028, the role has been given to another former swimmer, Nicole Hoevertsz, but with a background in artistic swimming.

The IOC is proud to say that two thirds of the members of the Brisbane 2032 Coordination Commission are women. At the top of the list is Kirsty Coventry. Just below her, in the position of vice-president, the American Anita DeFrantz.

The rest are IOC members, representatives of the athletes, international federations, National Olympic Committees and the International Paralympic Committee (IPC). In addition to the President and Vice-President, the Commission includes two members from each continent.

Coincidentally, the announcement of the composition of the Coordination Commission came just hours after another announcement about Brisbane 2032, which was more political but also very feminist. Queensland Premier Annastacia Palaszczuk (pictured above) has appointed herself as the new Minister for the Olympics. Again, quickly and well done.

The Australian leader revealed this on social media. She added the names of the three other nominees of the day, who will occupy some of the major roles in the preparation of the Brisbane 2032 Games to her announcement.

Queensland Deputy Premier Steven Miles will assist Annastacia Palaszczuk with all matters relating to Olympic infrastructure. The Minister for Sport and Tourism, Stirling Hinchliffe, will be responsible for sport and engagement. Finally, the State Treasurer, Cameron Dick, will oversee the commercial and investment aspects.

Annastacia Palaszczuk unveiled her cast on Twitter, via a video of the four new 2032 Games ministers being sworn in.

“Hosting the 2032 Games will generate $8 billion (US$5.8 billion) in economic and social benefits, plus 91,600 jobs,” the Prime Minister said in her video message. “This is the catalyst for the largest infrastructure programme our state has ever seen, with all levels of government working together to deliver projects on time”.

According to Annastacia Palaszczuk, the legislation for the creation of the organising committee is currently under consideration. It could be presented to Parliament before the end of October. There is no time to lose.

The composition of the Brisbane 2032 Games Coordination Commission: