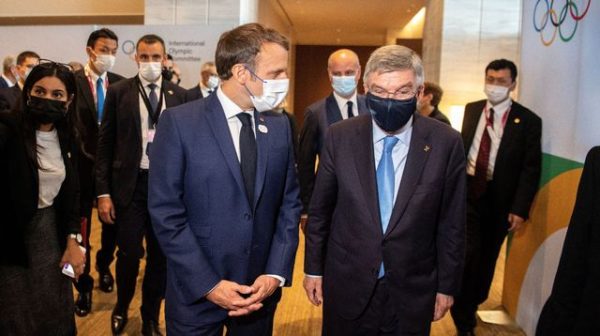 Is Thomas Bach stepping out of his role? According to a document consulted by AFP, the IOC president has expressed his “concern” about the results of French athletes at the Tokyo 2020 Olympic Games. In plain English, he found their level very average just three years before the Paris 2024 Games.

At the Tokyo Games, France finished eighth in the medal table. It brought back 33 medals, including 10 gold (plus 12 silver and 11 bronze). Its sports leaders were hoping for around forty, in line with the collective result of the Rio 2016 Games (42 medals, seventh place in the nations’ ranking). They thought that, three years before Paris 2024, such an objective would be a minimum, even in the middle of a sanitary crisis.

They were disappointed. So was Emmanuel Macron. On September 13th, at the reception for the medallists at the Elysée Palace, the President of the Republic told his audience that it would be necessary to “do much more” in Paris 2024. Not exactly a scoop. Then he insisted: “The results are not quite what we expected. The success of the Games will be the success of our athletes because that’s how it works”.

The objective set by the Head of State: the world’s top 5. Note: France has not been in the top 5 since the London Games in 1948. In other words, prehistory.

The French delegation’s half in earnest performance did not only make Emmanuel Macron cough. Thomas Bach also analysed it with a grimace. “In Tokyo, Thomas Bach expressed the IOC’s concern about the results of the French delegation in the run-up to Paris,” says an internal document from the National Sports Agency (ANS), the public interest grouping (GIP) set up in August 2019 to oversee high-level sport and the development of sports practice. “It states that the Games are successful when the host country’s athletes achieve great performances”. The document in question, the content of which is revealed by AFP, was drafted ahead of the last ANS board meeting.

Thomas Bach is said to have spoken to some of the leaders of the French delegation to the Tokyo Games. He told them, in essence, to shake things up, as the success of the Paris 2024 Games does not only depend on the quality of the organisation and the control of costs, but also on the collective performance of the host country.

In this respect, the Japanese have set an example. Because of the sanitary crisis, the National Olympic Committee had wisely announced in the last few weeks before the start of the Tokyo Games that it was no longer setting a medal target. But its athletes exceeded the highest expectations. The result: 58 medals, 27 of which were gold, and a third place in the nations’ ranking, behind the United States and China. And, by domino effect, historic television audiences. Bingo.

Will France do as well? With three years to go, only the very optimistic want to believe so. In Tokyo, two of the most generous sports in the programme in terms of medals, athletics and swimming, were very discreet. A silver medal for swimming (Florent Manaudou in the men’s 50m), the same result for athletics (Kevin Mayer in the decathlon). In both cases, the promise of a bright spell has been rather limited in just three years.

But the Japanese example keeps hope alive. At the Rio 2016 Games, Japan took the sixth place in the nations’ ranking, just ahead of France, with 41 medals, including 12 gold. In one Olympiad, admittedly extended by a year after the postponement of the Tokyo Games, the Japanese have gained three places and 17 spots on the podium. And this, without really benefiting from the advantage of playing at home, in front of their public.

Claude Onesta, the high performance manager at the ANS, presented the measures supposed to rectify the situation. They are based on three lines: better support for athletes, increased recognition for coaches, especially in financial terms, and a reinforced framework for the federations that are lagging behind.