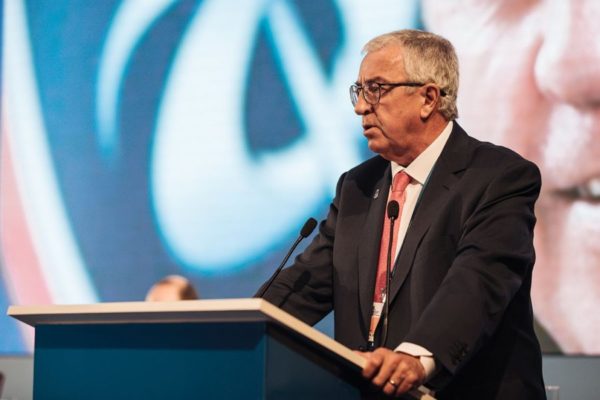 This was a historic weekend for the French sports movement. In only a few hours, two of its leaders secured a presidential seat in an international federation of an Olympic sport.

David Lappartient was the first to do so, on Friday, September 24th, with a second term at the head of the International Cycling Union (UCI). This was expected. The Breton was the only candidate.

Luc Tardif followed him the next day. The native of Trois-Rivières, Canada, who arrived in France at the end of the 1970s to pursue his career as a player, was elected in St. Petersburg as the new president of the International Ice Hockey Federation (IIHF). He succeeds Swiss René Fasel, who has been in office for 27 years.

Luc Tardif’s victory was much less expected. The Frenchman was up against four rivals. At 68 years old, he won in the 4th round of voting, beating the favourite, the German Franz Reindl, with 67 votes against 39 for his last competitor.

Elected for a five-year term, Luc Tardif became the 14th president of the international body. Just elected, he received congratulations from Vladimir Putin, the Russian President, and Thomas Bach, the IOC President. The day after his victory, he answered the questions of FrancsJeux.

FrancsJeux: You were not the favourite, but you came out on top in each round of voting. What made the difference, especially against the German Franz Reindl, supported by the Russian camp?

Luc Tardif: I was the last of the five candidates to enter the campaign, but throughout the summer I went on a virtual world tour. I met with 95% of the IIHF member national federations by video conference. I wanted them to explain to me what they expected, so I listened to them. Then I tested some of my ideas with them. Talking to people face-to-face for an hour and a half, even in virtual mode, is quite rare. In such a context, people talk more easily than at a conference. All this allowed me to build my programme, which I had constructed from my own convictions. I called this phase of my campaign the co-construction process. I published my programme very late, on September 7th, for an election scheduled for the 25th of the same month. But I knew that it corresponded to a certain reality. Then I had to convince people. People wanted change. A dynamic was created. But this victory is also the work of an entire team.

What did René Fasel, your predecessor, say to you after your election?

I think he was a bit surprised by the turn of events. I’m even sure of it. He saw a desire for change expressed by the federations. The IIHF is in very good shape, especially financially, the foundations are solid. But with now 80 member federations, an imbalance has developed between the big nations and the smaller ones. Diplomacy is now needed.

What is the first issue you will deal with during your term as President?

The 2022 Winter Games in Beijing and the presence of NHL players. We have an agreement, but we will have to finalise and sign this agreement in principle with all the parties, including the Chinese organising committee. Everything seems to be on track, but we have to be careful because we don’t know yet what the sanitary situation and the measures decided by the Chinese will be. We will have to decide on a deadline after which, if things go wrong, the qualifying countries could turn to a plan B.

Are the Beijing 2022 Games a major event for the development of ice hockey?

It is obvious. The main development potential is there, and more widely in Asia. Many sports have understood this. The NHL has also understood that the business and merchandising prospects are very important. We must not miss this event, it will be more important than PyeongChang 2018 and Milan-Cortina 2026. The sanitary conditions remain unknown, as does the presence of spectators. But the Tokyo Games have shown that even without spectators, the Olympic event can be a great success.

During your campaign, you told us that if you were elected, you would very quickly gather your rivals to work together. Is this still the case?

Of course it is. And we did not wait. On Saturday evening, after the election, we held a first meeting of the executive committee. Half of it was renewed. With the four other candidates, we had decided on a sort of pact to get us up and running as soon as the election was over, regardless of who won the election. There are many issues to be dealt with: the Beijing Games, the appointment of commissions, the designation of a new secretary general… There is no time to lose.