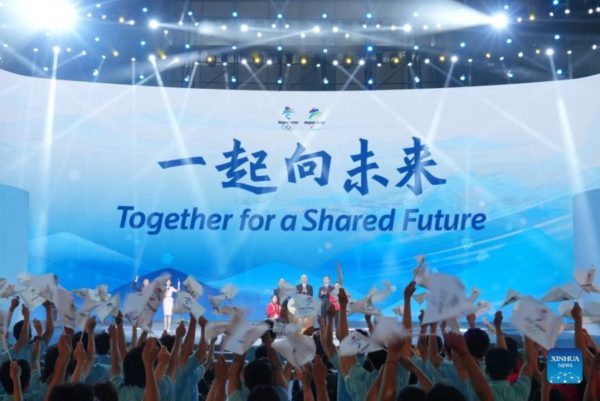 History keeps being repeated. For the second time in a row, the traditional lighting ceremony of the Olympic flame in Greece, in ancient Olympia, will take place behind closed doors. Not a single spectator will be allowed to attend the ritual on the ruins of the Temple of Hera on October 18th. As with Tokyo 2020, the torch for the Beijing 2022 Games will be lit in a very small group.

The decision was reportedly taken by the Greek authorities in consultation with the National Olympic Committee and the Chinese organisers. In the wake of this decision, it was decided to cancel the week-long relay through Greece altogether. Once lit, the flame will be handed over to the Chinese the following day in a small ceremony at the Panathenaic Stadium in Athens. Then it will fly to China.

What happens next remains a mystery. The Chinese are in no hurry to communicate the details of the torch relay. To date, it is still not certain that a relay will even be organised. The trend seems to indicate that it will not, but anything is possible. It seems almost certain that the eventual route of the torch will take place without an audience along the road.

If the torch does not get a week-long trip within the country, Greece will be able to console itself by hosting the IOC Executive Board on its soil. The decision is official: its members will meet face-to-face on October 15th, for the second time since the start of the sanitary crisis, after a physical meeting last July in Tokyo during the Summer Games.

The IOC government had not met in Athens since 2004. But the occasion is too historic to be overlooked. The day after their meeting, its members will travel in procession to Olympia to celebrate the 100th anniversary of the creation of the IOC in Lausanne in 1921.

The announcement of the cancellation of the torch relay in Greece came just hours after the Chinese announced the official slogan of the Beijing Games.

The organisers of the Games launched the invitations for the entire world to come and participate in the next Olympic event by unveiling its rallying formula: “Together for a shared future”. Classic. Certainly in the spirit of the times.

The motto was selected by a group of experts from 79 proposals submitted since May 2020. According to official sources, it gave rise to “numerous discussions”.

According to the explanations of the organisers of the Beijing 2022 Games, the word “Together” is intended to reflect the way in which humanity remains strong and united in the face of adversity. The IOC led the way by adding “together” to its historic motto, “Higher, Faster, Stronger”. The Chinese have taken it over.

As for the “shared future”, suggested by the Chinese, the expression embodies the vision of a better life and conveys both hope and confidence.

The organising committee explained in a statement: “The motto of the Beijing 2022 Games stands for a universal goal of unity, peace, progress and inclusion. It is the Chinese interpretation of the new Olympic motto, ‘Faster, higher, stronger – together'”. Barely adopted, already interpreted.