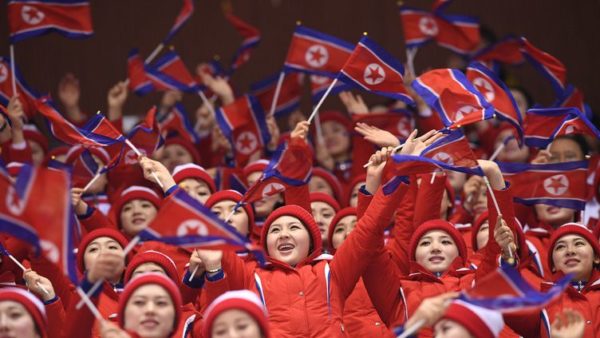 Times are changing in the Olympic movement. But the pendulum is swinging back. In February 2018, a unified team of the two Koreas marched in good order behind a unification flag at the opening ceremony of the PyeongChang Winter Games. Peace through sport. The magic of the Games. Historic.

Next February, South Korea will march alone in the parade of delegations at the opening of the Beijing 2022 Winter Games. North Korea will watch from a distance. The IOC announced on Wednesday, September 8th, through its president, Thomas Bach, that it had suspended the North Korean National Olympic Committee until the end of 2022.

The decision was taken by the IOC’s executive board, which met by video conference during the day. North Korea will not see the Beijing Games, four years after having created the buzz in PyeongChang 2018, for having made common cause with its neighbour and animated the stands with its battalion of cheerleaders (photo above).

North Korea’s decision was justified by the sanitary crisis. North Korean officials had explained that the conditions in Japan were not reliable enough to guarantee the safety of their athletes.

The explanation convinced no one, least of all the IOC. By boycotting the Tokyo Games, North Korea violated the Olympic Charter. Specifically, it violated Rule 27.3, which states that “each National Olympic Committee is required to participate in the Games of the Olympiad by sending its athletes.”

Thomas Bach explained on Wednesday (September 8th) that the IOC had given North Korea “every assurance that the Games would be held safely”. The body had made “constructive proposals to find an appropriate and tailor-made solution until the very last minute (including the provision of vaccines), which were systematically rejected by the NOC of North Korea.”

The sanction pronounced on Wednesday, September 8th, by the IOC Executive Board is not limited to a ban on participating in the Beijing Winter Games. The Olympic body also chose to cut North Korea off completely. The North Korean Olympic Committee will not receive any more money from the IOC until the end of 2022. Fifteen months on a strict diet, accompanied by the suspension of all aid and support programmes, including Olympic Solidarity.

The question of the athletes, the first victims of their leaders’ decisions, but never consulted on the way forward, remains. True to its code of conduct, the IOC does not want to sacrifice them because of politics. Thomas Bach has made it clear that the situation of North Korean athletes who have qualified for the Beijing Winter Games, or are in a position to do so, will be examined “on a case-by-case basis” in the coming months.

In other words, the Olympic body reserves the right to invite some athletes by offering them a neutral status. But it is hard to imagine the Pyongyang regime letting them pack their bags and fly to the Chinese capital to compete in the Winter Games.