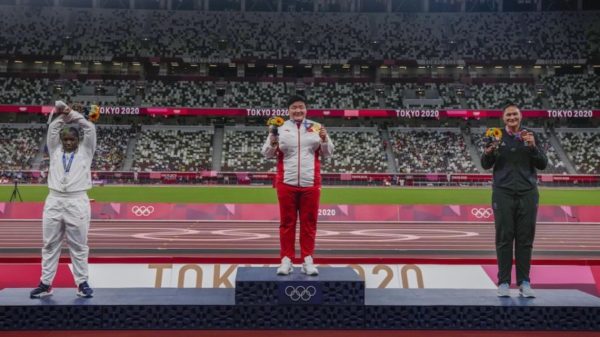 A page has been turned. For the first time, athletes were allowed to express an opinion at the Tokyo Games, whether political, social, racial or religious, on the Olympic stage. The IOC gave them the green light, after relaxing Rule 50.2 of the Olympic Charter.

This new situation remains very restricted. The expression of an opinion cannot take place during the medal ceremony. The podium and the anthems are excluded. But a door has been opened. At the Tokyo Games, the players of several women’s football teams took a knee before their match. American shot putter Raven Saunders crossed both arms over her head after receiving the silver medal (pictured above). Two Chinese track cyclists wore a Mao pin on their tracksuits.

FrancsJeux: The Tokyo Games were marked by several expressions of opinion by athletes, on the field or the podium. Is this a turning point in the history of Olympism?

Carine Duteil: These expressions of opinion at the Tokyo Games, both on the field and on the podium, were very significant. By kneeling down, by expressing an opinion on the podium, but also by denouncing the political regime of their country, as the Belarusian sprinter (Krystsina Tsimanouskaya) did, the athletes sent strong messages. This step forward is significant because it is very symbolic of the role that athletes want to play, especially in the fight against racism and for inclusion. It reminds us of John Carlos and Tommie Smith’s black-gloved fists on the podium at the 1968 Mexico City Games, or Ethiopia’s Feyisa Lilesa, a silver medallist in the marathon at the Rio 2016 Games, crossing the finish line with his wrists crossed over his head in protest of the Ethiopian government’s policy against the Oromo ethnic group. Tommie Smith and John Carlos were excluded from the athletes’ village, but their image belongs to the great moments of history in the IOC Olympic Museum in Lausanne.

Yes, it is. But the IOC is very contradictory on this issue. By seizing many issues that are linked to people and the planet, by being increasingly concerned about sustainability and solidarity, by creating a team of political refugees, it is giving a political dimension to the Games and to the Olympic movement. Thomas Bach’s speech at the opening ceremony of the Tokyo Games was a political ideology. Today, the Games are no longer politically neutral. In such a context, one might ask why Rule 50.2 does not disappear.

Which opinion expressed at the Tokyo Games do you find most interesting?

The action that surprised me the most was the Chinese cyclists wearing Mao pins. It led the IOC to question the Chinese Olympic Committee.

The IOC did not sanction any of these violations of Rule 50.2. Why?

Before the Games, the IOC had announced sanctions if the rule was breached, but one might think that it was primarily seeking to be dissuasive. It wanted to try to avoid the excesses of uncontrollable speeches. But it would be inappropriate for the IOC to sanction these athletes while posing as a defender of human rights.

Did the relaxation of Rule 50.2, decided by the IOC after consulting the athletes, really change the situation?

I think so. We are no longer in Pierre de Coubertin’s days, when athletes had to express themselves through sporting gestures. Today, they are increasingly becoming major players in the world. In addition to being athletes, they are also citizens. Their statements are sober and dignified, but they have a considerable impact. The Tokyo Games showed that their messages can be relayed and heard everywhere.

Will the next Games be held in Beijing? What can we expect from Rule 50 in a country like China?

The movement is underway, and Rule 50.2 cannot stop it. In the particular context of the Beijing 2022 Winter Games, with a large number of organisations and even governments calling for a boycott, we can expect some athletes to take a strong stand. Many are now ready to become spokespersons.