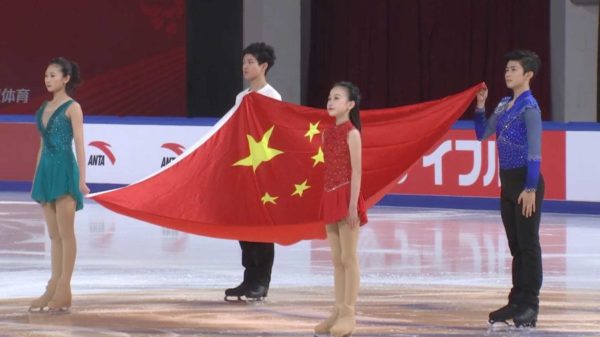 Worrying. With 170 days to go before the opening ceremony of the 2022 Beijing Winter Games, which is less than six months away, China continues to cancel all the international sports events planned on its territory one by one. The latest, however, is directly related to the future Olympic event.

The International Skating Union (ISU) announced the cancellation of the Chinese Figure Skating and Ice Dance Grand Prix on its Twitter account, on Tuesday, August 17th. It was due to be held from November 4-7th in Chongqing, a city with more than 30 million people in the south-east of the country. The competition was part of the ISU Grand Prix, the major circuit of the ISU, which includes six stages and a Grand Final at the end of the year.

This cancellation is linked to the sanitary situation. The ISU explained it very soberly: “Because of the very limited number of international flights to Chinese cities and the sanitary restrictions linked to COVID-19, a bubble around the competition cannot be implemented.”

Without a sanitary bubble, there is no competition. China is pausing everything. It is up to the ISU to roll up its sleeves and find a fallback solution quickly. The international body has already launched a call for applications to potential replacements, explaining that it wants to “maintain the 6 figure skating Grand Prix events” during the season. Enthusiasts take note.

The Grand Prix Final, scheduled to take place in Osaka from December 9-12th, 2021, remains on the agenda. It is intended to be a prelude to the 2022 Winter Games in Beijing (February, 4th-20th). Japan has just hosted the Olympic Games and is preparing to host the Paralympic Games again. A figure skating Grand Prix Final should not seem more complex to set up for the country than a regional championship.

With less than six months to go before the Beijing Winter Games, the Chinese authorities’ decision to remove the Chinese Grand Prix figure skating event from the calendar comes as no surprise. It is in line with the logic of a country whose sanitary policy remains one of the strictest on the planet.

However, by remaining self-assured, the Chinese are sending a message to the Olympic movement. They are showing their hands: the Beijing Winter Games will be covered in an even more impermeable sanitary bubble than the one set up by the Japanese for Tokyo 2020.

The basics will remain the same from one event to the next: daily tests for the athletes and their immediate environment, compulsory wearing of masks, social distancing. Nothing very unexpected. But the Chinese want to go further.

According to the New York Times, the organisers are considering to use underarm thermometers to be worn all day. They have decided to install plexiglass walls in all interview areas to isolate the athletes from the media. They reportedly plan to prevent any direct contact between competitors and judges and referees.

The quarantine conditions have not yet been disclosed by the Chinese organisers. At the Tokyo Games, the IOC was asked several times about this issue. But its spokesman, Mark Adams, evaded the issue, only saying that it was difficult to talk about an event that would take place six months later. According to some sources, Chinese residents working on the Games will be subject to extended isolation after the end of the competitions, before being able to return to their homes in the rest of China.

What about the public? The same uncertainty remains. But the organisers still have not launched the ticketing process, proof that the closed-door option has not been ruled out. According to the New York Times, the Chinese have already decided to reduce the number of foreigners allowed to travel to Beijing for the Winter Games to less than 30,000, including accredited guests. For the Tokyo Games, more than 40,000 people were allowed into Japan.