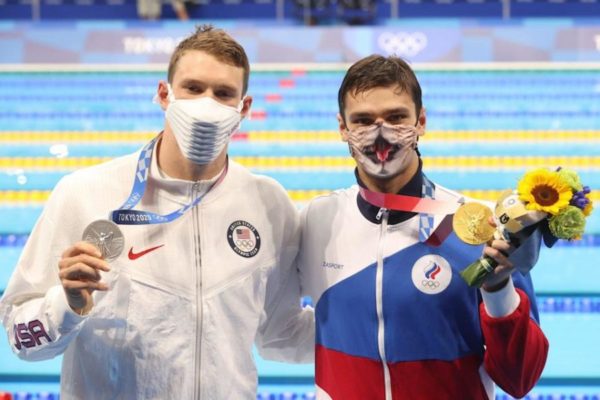 The situation was awkward at the Olympic pool, this Friday, July 30th, after the final of the men’s 200m backstroke. The American Ryan Murphy, beaten by the Russian Evgeny Rylov for the gold medal, did not hold back his tongue in the mixed zone. He suggested to the journalists that the final had probably not been “clean”. A direct allusion to the presence of Russian athletes at the Tokyo Games, despite the suspension of their country for having organized state-run doping during the 2014 Sochi Games.

Ryan Murphy is not just a swimmer among others. A two-time Olympic champion at the 2016 Rio Games in the men’s 100 and 200m backstroke, he is also one of the captains of the U.S. swimming team at the Tokyo Games. His voice is important, people listened to him.

Since the beginning of the Olympic competitions, he has been defeated twice during his favourite events. In the men’s 100m backstroke, the American won the bronze medal, outdistanced by two swimmers from the Russian Olympic Committee (ROC) team, Evgeny Rylov and Kliment Kolesnikov. In the men’s 200m backstroke, the first of the two Russians again deprived him of the victory.

Two defeats against representatives of a country accused of doping practices and manipulation of anti-doping data is a lot for Ryan Murphy. After the first one, he held his tongue. At the second, he was more direct.

“It’s a huge mental burden for me to swim all year for a final that’s probably not clean, but it is what it is,” he declared. “I can’t both train for the Olympics, at a very high level, and try to pressure the people who take decisions to make them realize they’re making the wrong ones.”

As Bronze medalist, the British Luke Greenbank ventured on the same path during a press conference, after the podium ceremony. “It’s frustrating to know that there is a state-run doping program and nothing is being done about it,” he explained. “Not knowing if the race is clean is obviously a very difficult situation….It’s a weird place to be, but I’d rather focus on myself and what I can control.”

The Briton and the American did not mention Russia. Above all, they did not name the winner of the day, Evgeny Rylov, now double Olympic champion. But everyone understood.

Placed at the center of the stage during the press conference, between the two other medallists, Evgeny Rylov did not escape a question about his presumed cleanliness. The Russian did not avoid the obstacle. “I have always been an advocate of clean sport,” he replied. “From the bottom of my heart, I’m for a clean sport… Ryan (Murphy) hasn’t accused me of anything, so I’d rather not comment.”

Suspended from all Olympic and world competitions until December 2022, Russia is present at the Tokyo Games under the colors of its National Olympic Committee. Its delegation includes 330 athletes. In the evening of this Friday, July 30th, it was placed 4th on the medals’ table, behind China, Japan and the United States.