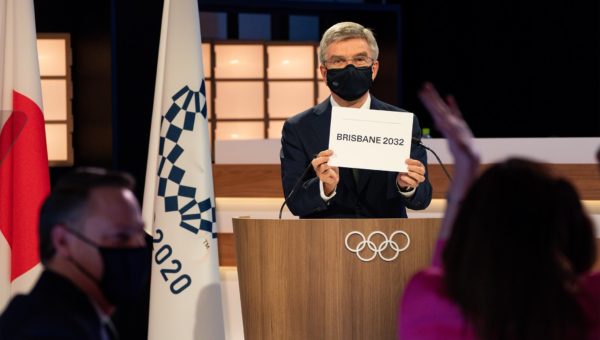 Mark Adams, the IOC spokesman, had assured the media on Tuesday, July 20th, on the evening of the first day of the Olympic body’s session: the designation of Brisbane as host city of the Summer Games in 2032 was not a done deal yet. “It is not a concluded business”, he had slipped without a hiccup. Nobody had believed him.

Less than twenty-four hours later, a vote of the IOC members gathered in the Okura hotel (Tokyo) ended what was left uncertain. Brisbane was unsurprisingly designated to host the summer Games in 2032, four years after Los Angeles and eight after Paris.

The IOC session did not do things by half. The Queensland capital obtained 72 votes out of 80. Only five members expressed their refusal of a decision made in their place, several months earlier, by the Executive Board. Three others abstained.

Despite the total absence of suspense and competition, Thomas Bach did everything according to custom. The IOC President took a white card marked with the words Brisbane 2032 out of the envelope. Then he announced: “The International Olympic Committee has the honor to announce that the Games of the 35th Olympiad are awarded to Brisbane, Australia.”

With this decision, the IOC ensures more than a decade of presumed security, with Paris 2024, Los Angeles 2028 and Brisbane 2032. Australia, on the other hand, gets the Olympic event for the third time in its history, after Melbourne in 1956 and Sydney in 2000.

Adrian Schrinner, the mayor of Brisbane, promised it less than two hours after the designation, during a press conference: “We will propose a new model of Olympic Games to the world, by decreasing the costs and increasing the benefits tenfold.”

Thomas Bach will not say otherwise. Invited to comment on the choice of Australia, the IOC president suggested that the Australian project was in line with the Olympic body’s reform plan. “The legacy of the Brisbane Games is already acquired even before the event takes place”, he explained. “The facilities are of exceptional quality and the enthusiasm of the population is no longer to be demonstrated.”

In detail, the project does not propose any revolution. But it respects the new IOC guidelines to the letter: already existing sites, a tight budget (4.5 billion dollars), a political consensus of all levels of the pyramid (city, state and federal government).

The Queensland bid file provided for a system organized around three major poles: the city of Brisbane, the Gold Coast (65 km to the southeast), and the Sunshine Coast (85 km to the north). The financing of the Games will be private. The facilities will be, for the most part, inherited from the 2018 Commonwealth Games held on the Gold Coast. Solid and without apparent flaws.

But anything can happen with 11 years to go before the event. With more than a decade ahead of them to prepare their case, the Australians have a historically long time to stay on track… or get off track forever.

The Brisbane Games will open on July 23rd, 2032, during winter in the southern hemisphere. But winter, in Queensland, usually has a climate and temperatures that are very similar to summer’s in most parts of the world.

By awarding the Summer Games now until 2032, the IOC is protecting itself from the inconvenience of referendums hostile to a candidacy or campaigns against the Olympic event. Thomas Bach rubs his hands, even if he will have to give his presidential office back in 2025.

“This new approach to the selection process of host cities is lighter, more collaborative and more compact,” he suggested. “We now have a significant number of interested parties for the 2036 Games, and even for the 2040 Games, which is almost 20 years away. I don’t remember us ever being in such a favorable position 20 years before an edition of the Olympic Games. We approach Tokyo 2020 with complete confidence in the future of the Olympic movement.” So the IOC isn’t stricken by the crisis. That’s a bit strong.