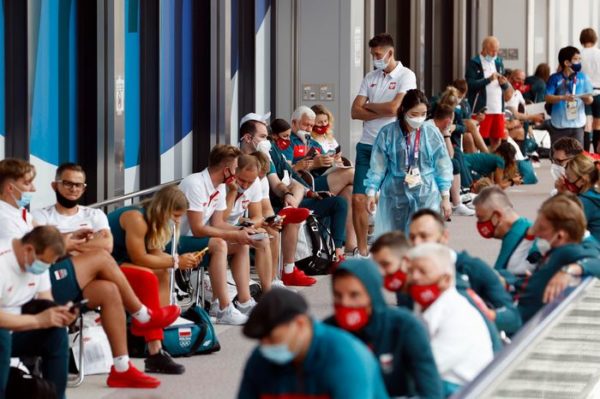 Japanese organizers are no longer counting the hours, with only four days to go before the opening ceremony of the Tokyo Games. The trend was predictable but still dreaded, the last days before the event are more cruelly focused on the number of COVID-19 cases within the Olympic family.
On Monday, July 19th, two new cases were added to the list. They concern athletes. Two disciplines are involved, beach volleyball and gymnastics, and two delegations, affected: the United States and the Czech Republic.

The first case has been identified. Ondřej Perušič, a Czech beach volleyball player, tested positive for COVID-19 at the athletes’ village. He is the third competitor in this situation within the village since its official opening last week. Ondřej Perušič had been vaccinated before traveling to Japan. He is not showing any symptoms.

Paired with David Schweiner in the men’s draw, Ondřej Perušič will not be able to enter the competition on the scheduled date, Monday, July 26th, as he will still be in isolation. The Czech Olympic Committee explained that it had asked the organizers of the Games to postpone his first match. The regulation allows it. But the postponement will not be indefinite under penalty of distorting the competition.

The second case was not yet confirmed, but it promises to be very media-friendly. The city of Inzai’s authorities, in the prefecture of Chiba, revealed on Monday, July 19th, that a young American gymnast, “still a teenager”, had tested positive on arrival in Japan. Her name has not been released.

The young athlete was reportedly detected on Sunday, July 18th, during the final training camp of the American team in Inzai. A second test, conducted the next day at the hospital, confirmed the result. Another American gymnast was isolated in the hotel after being considered to be a contact case.

Earlier, two players from the South African men’s soccer team, Thabiso Monyane and Kamohelo Mahlatsi, were the first athletes to test positive for COVID-19 inside the Olympic Village. A video analyst of the team was also tested positive.

With only 4 days to go before the opening of the Games, the organizers recorded more than sixty COVID-19 cases among people directly connected to the event. The athletes are not the least affected, despite the 80% vaccination rate announced for all delegations.

The victims also include a media representative, a member of the IOC – the South Korean Ryu Seung-min -, several service providers of the Games, a few visitors belonging to the Olympic family. The list is increasing every day and it could still grow during the upcoming ones, with the arrival of a more important number of athletes to the village, as the beginning of the events is approaching.

According to the IOC, the discovery of these COVID-19 cases among athletes confirms the relevance and effectiveness of the sanitary measures taken by the Japanese. A way of seeing things.

Seiko Hashimoto, insisted on the fact that the organizers had “a plan already settled” to respond to any epidemic in the village, while the executive director of the Olympic Games, Christophe Dubi, affirmed that the transmission between the various present groups was “almost impossible”.

Thousands of athletes who are to compete in the Games have not yet arrived at the village.