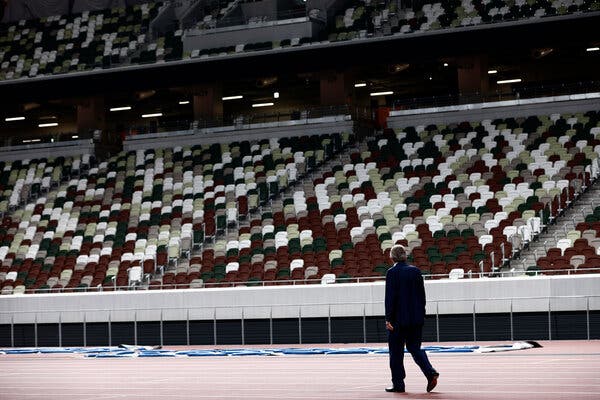 The decision had become inevitable. It did not surprise anyone. But, a few hours after its announcement, it remains hard to believe. Unreal.

The Tokyo 2020 Games will be held behind closed doors. Spectators will not be allowed to enter the competition sites in Tokyo and three neighboring prefectures, Chiba, Kanagawa and Saitama. The Games of silence. The Games of empty stands.

The decision was made on Thursday, July 8th, at the end of the afternoon, after a meeting between the Japanese government, the authorities of the capital, the organizing committee, the IOC and the IPC. It was first announced by the Olympic minister, Tamayo Marukawa. Then Seiko Hashimoto, the president of the organizing committee, detailed it later in the evening during a press conference. It followed the announcement by the Japanese government, in the middle of the day, of the extension until August 22 of the state of emergency in Tokyo and its surroundings.

“We really wanted to have full stadiums so that all the communities could be involved in welcoming the athletes,” explained Seiko Hashimoto. “We also wanted to offer a full expression of the power of sport. But today, in the current sanitary situation, we have no choice but to organize the Games in a limited way.”

With two weeks to go before the opening, it is not yet a given that all sessions of the Olympic Games will be affected equally by the closed-door decision. The events organized far from Tokyo, in prefectures not concerned by the state of emergency, could accept a reduced number of spectators. Fukushima, for example, where softball and baseball games are to be held.

But Tamayo Marukawa is cautious. “We will discuss it”, she said on Thursday, July 8th. In Sapporo, host city of the marathons and race walking events, the local authorities have already asked the inhabitants not to come along the course to encourage the athletes.

For the Japanese organizers, shaken by corruption cases and by a dizzying inflation of costs even before the beginning of the pandemic, the sanitary crisis has transformed their daily life into an endless nightmare in the last 16 months. The timeline sums it up. On March 24th, 2020, Thomas Bach and Shinzo Abe, then Japanese Prime Minister, announced their joint decision to postpone the Tokyo Games. On March 20th, 2021, the organizers decided that foreign spectators would not be authorized. On June 21st, they established the public’s gauge to 50 % of the capacity of the sites, with an overall limit reaching 10 000 persons. Thursday, July 8th, last episode in date, they declared that the Games of Tokyo would take place behind closed doors.

The Japanese have been through a lot, but this last blow is not the least hard. Financially, the impact is considerable. Before the pandemic began, organizers were hoping to approach $1 billion in ticketing revenue. They had secured $880 million. With the Games taking place without spectators, this budget line will be close to zero. Of course, the venues will not be totally deserted. But the only witnesses to the competitions – athletes, coaches, officials, media, volunteers – do not pay for their seats.

With stadiums and halls almost empty, the gap between the action on site and its televised spectacle promises to be abysmal. Without any cheering atmosphere in the stands, the entity in charge of the production of the images of the Games, OBS, will have to accomplish miracles to propose a product likely to maintain the illusion of an Olympic festival to the broadcasters.

With only two weeks to go before the opening, there are going to be some sleepless nights for the organizers, as they will have to work relentlessly to settle the numerous pending questions in time. At what level should the security effort be reduced on official sites occupied only by accredited persons? How many volunteers should be kept in the system, without any spectators to inform, direct and place? Should we maintain all the demountable stands on temporary sites? What kind of “animation” should be planned during the competitions, in stadiums and halls filled with only a few hundred media, officials and coaches?
But the announcement remains a hard blow for the organizers of Tokyo, and will increase the cost of the Games for the Japanese people. Local organizers get their revenue from ticket sales, and Tokyo 2020 had originally projected that revenue to reach $800 million.

“We will see a decrease,” Muto acknowledged.

The shortfall will now have to be made up by the Japanese. The official cost of the Games already reaches $15.4 billion, but it is believed to be much higher – perhaps twice this amount.