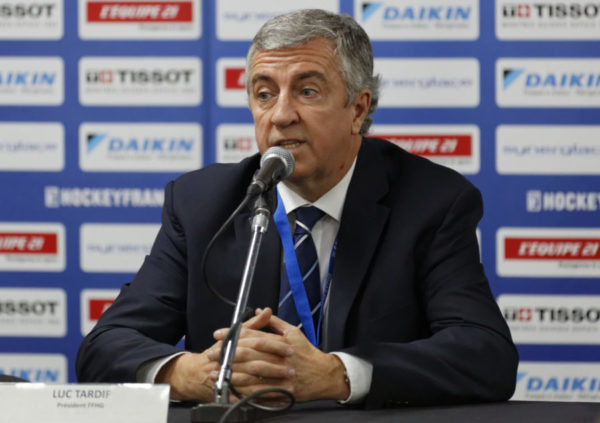 A page in the history of ice hockey will soon be turned. A page that contains many paragraphs. René Fasel, 71, will hand over the keys to his office as president of the International Ice Hockey Federation (IIHF) in September. Elected for the first time in 1996, the Swiss will leave his position after a quarter century leading the Federation.

Five candidates are lining up to replace him. Five men, all from Europe: Henrik Bach Nielsen from Denmark, Petr Briza from the Czech Republic, Sergej Goncharov from Belarus, Franz Reindl from Germany and Luc Tardif from France. All are members of the IIHF Council. Three of them, Luc Tardif, Petr Briza and Franz Reindl, played ice hockey at the professional level before embarking on a career in management.

Current treasurer of the international body, president of the French Ice Hockey Federation since its creation in 2006, Luc Tardif was the last to declare himself. But he is among the favorites. He answered the questions of FrancsJeux.

FrancsJeux: Why did you decide to enter the race for the IIHF’s presidency?

Luc Tardif: I wasn’t interested at first. But I was asked to be a candidate. I accepted because I have been on the IIHF Council since 2012, I am the treasurer, and I am also a member of the Executive Committee. I believe I have the experience to replace a president who has been in place for 25 years. I can ensure continuity without causing a jolt, while asserting my ambition, especially in terms of development. I know the tools and how our organization works well. I was involved in many of the important decisions taken over the last two years, after the cancellation of the 2020 World Cup in Switzerland and the transfer of the 2021 World Cup matches, initially allocated to Belarus, to Latvia. We have overcome these challenges while maintaining the financial health of the IIHF. For this presidential campaign, I did not want to stay in the waiting room. I wanted to be a player.

What is the major theme of your campaign?

Balance. The IIHF is the only international federation to organize a world championship every year in all categories. The World championship is our flagship product. It allows us to finance all other competitions. We need to maintain and improve its quality while continuing to develop ice hockey around the world. The IIHF currently has over 100 members. We need to increase this number further, especially in Asia, where the succession of the PyeongChang 2018 and Beijing 2022 Winter Games can contribute to the development of the game and the interest of the public. Another pillar of my program is sustainable development. Through technology, we have significantly reduced the carbon impact of ice rinks. We must remain at the forefront of technical progress, to offer the highest level of hockey while meeting sustainable requirements.

A campaign for the presidency of an international federation requires significant resources. Do you have enough to win?

You need resources, that’s obvious. But the IIHF remains a modest federation. In addition, the sanitary crisis has reduced travel possibilities for over a year. This makes the campaign less expensive. I have the support of the French Olympic Committee (CNOSF) for leaders who wish to launch an international bid. It notably concerns communications tools.

The five candidates for the presidency of the IIHF are all men, from a European country, already members of the Council and three of them are former top field hockey players. What distinguishes you from your four rivals?

France’s position. We are in the middle of the scale, having been a developing country before reaching the top level. As a French leader, I can embody the necessary balance that the IIHF will need to keep on progressing. But, whoever wins the election, we will have a more collegial functioning in the future. We have already discussed this among ourselves, the candidates, and have agreed on this.

As outgoing president without being a candidate for re-election, René Fasel will certainly play a role during the campaign. What is your relationship with him?

I have worked with him since I joined the IIHF Council. He asked me to introduce myself. He then gave me the role of treasurer. If elected, I will build on his legacy. I may not have been the favored candidate, but I will be loyal and independent.