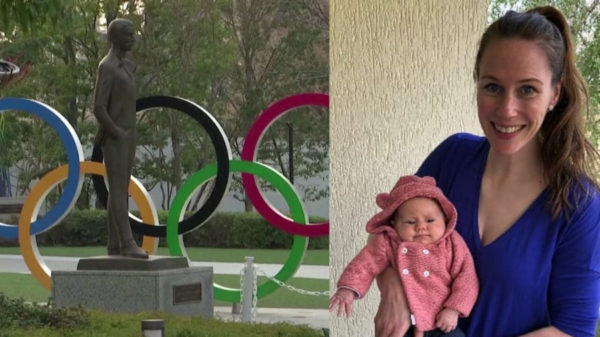 Unexpected but welcome. In less than forty-eight hours, the Olympic movement has opened the door to gender equality a little wider. And it has given the women’s cause a major boost.

In the wake of Brigitte Henriques’ clear victory in the race for the presidency of the French National Olympic Committee (CNOSF), becoming the first woman to head the body, Japanese organisers announced that they would allow breastfeeding athletes to bring their children to the Tokyo Games.

Last March, the organising committee had explained that the ban on foreign spectators entering Japan would also apply to athletes’ families. It said that there would be no exceptions to this rule.

But several athletes and young mothers campaigned via social media to obtain the right to travel with their children. Leading the way was Canadian basketball player Kim Gaucher (pictured above). She explained that, in the current situation, the IOC and Japanese organisers left her with no alternative but to give up the Tokyo Games or spend 28 days without her three-month-old daughter, Sophie, whom she chose to breastfeed.

“Today I am forced to choose between being a breastfeeding mother or an Olympic athlete. I can’t have both. Tokyo said no friends, no family, no exceptions,” she explained in a video posted on her Instagram account.

American marathoner Aliphine Tuliamuk, winner of the February 2020 Olympic trials, followed suit. She said she could not “imagine going to the Games without her five-month-old daughter”, Zoe, whom she is breastfeeding.

Both athletes were heard. The Tokyo Games organising committee announced in a statement on Wednesday, June 30th, that it had relaxed its rules. “After carefully considering the unique situation faced by athletes with breastfed children, we are pleased to confirm that, if necessary, breastfed children will be able to accompany athletes to Japan,” it said.

Note: breastfed children will not be accommodated in the athletes’ village. They will have to be in approved hotels. It is up to the mothers to organize the logistics to enable them to continue breastfeeding while participating in the competitions. Not a simple task.

Coincidentally, the announcement by the Japanese organisers came on the same day as the verdict of the Court of Arbitration for Sport (CAS) concerning the Canadian boxer Mandy Bujold. The young woman had appealed against the IOC’s decision in May not to allow her to participate in the Games, as her world ranking was insufficient to qualify for a quota for the Olympic tournament.

But the Canadian boxer explained that the birth of her daughter Kate Olympia in November 2018 had forced her to stay away from the rings for many months. When she returned, the sanitary crisis disrupted the international calendar. Mandy Bujold then prepared to go get her ticket to the Games at the last Olympic qualifying tournament, scheduled in Argentina. But it was cancelled because of the COVID-19 pandemic.

Rejected by the IOC, her case was deemed admissible by the Court of Arbitration for Sport. In Tokyo, Mandy Bujold will become the first Canadian to participate in two consecutive Olympic Games in boxing. She took 5th place in Rio in 2016.