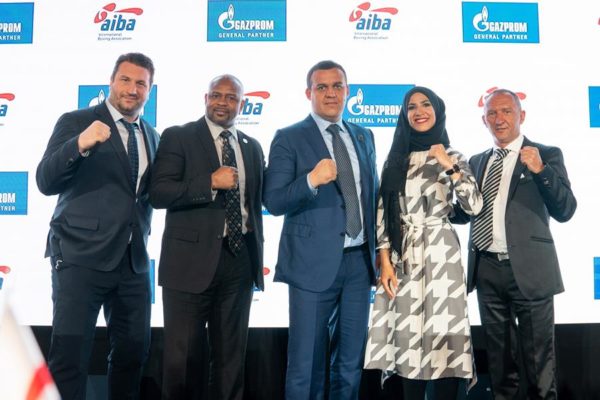 It is still suspended from the Olympic movement, its past remains troubled and its reputation needs to be rebuilt. But AIBA, chaired since last autumn by the Russian Umar Kremlev (photo above, centre), seems to have regained its presence and elegance. The world boxing body showed it on Monday, June 28th, from Lausanne, during a press conference which looked like a rebirth.

For the occasion, AIBA chose a prestigious venue, the Beau-Rivage Palace Hotel, known to the Olympic movement for regularly hosting IOC members visiting Lausanne. This choice was certainly not made by chance.

The casting of the press conference alone spoke volumes about AIBA’s desire to show itself in a new light, after the sulphurous Gafur Rahimov episode.

In the centre of the podium, Umar Kremlev, the president of the body, spoke in Russian in a calm tone. “We all know that what happened before us was, to put it bluntly, a crime,” the Russian leader ventured.

To his right, the American Roy Jones Jr. (photo above, 2nd from left), multiple world professional champion, came to testify without holding back his emotion about his Olympic experience, his defeat in the final of the 1988 Seoul Games against the South Korean rival, at the end of a fight that he had smartly dominated. “I really want to get involved and be part of the solution,” suggested the American.

Another distinguished guest, called upon to speak from Canada remotely: Richard McLaren, the new AIBA recruit, asked by Umar Kremlev to stir up the past without holding back his actions, with the mission of getting to the bottom of the cheating scandal of ex-referees and former officials’ corruption.

The Canadian lawyer admitted it without searching for words: he would not have accepted the mission entrusted to him by AIBA without the assurance of being able to investigate in complete independence. “We have only been working since June 10th, but we have done it so far with excellent cooperation from AIBA in terms of day-to-day information,” McLaren said.

The Canadian explained that his team’s investigation would be conducted in two phases. The first phase will look at the failings of the judges, notably at the Rio 2016 Games, where all 36 referees assigned to the competition were suspended. A first report is expected at the end of August.

In a second phase, Richard McLaren will focus on AIBA officials’ activities since 2006, with the ambition of shedding light on possible acts of corruption, violation of sports rules or manipulation of competitions or elections. A vast programme.

As a bonus, AIBA has entrusted Professor Ulrichth Haas, who was also present at the press conference in Lausanne on Monday, June 28th, to carry out an in-depth reform of the body’s governance. He will lead a group of legal experts to examine current governance structures and make concrete recommendations for further improvements.

Finally, AIBA says it is currently finalising an agreement with an accounting firm to conduct an independent audit of its finances.

The road ahead is long. The IOC, in particular, will probably need a little more than a few promises and fine words in the VIP room of a Lausanne palace to bring AIBA back into the fold of the Olympic movement.

Umar Kremlev knows this. He wants to be patient, but not waste time. “We have appointed the best independent experts to guide us towards the highest standards of governance and sporting integrity,” he explained on Monday, June 28th, in Lausanne. “We have also ensured the financial stability of our organisation, thanks to the sponsorship of Gazprom, with commercial support to come. But we will not stop there. This is all part of the huge change we are proposing, which will allow boxers to be sure of their future, to be sure of being judged fairly and to receive financial reward for their fights.”

With less than a month to go before the Tokyo Games, Umar Kremlev and AIBA have scrapped the event. They won’t be there. But they make no secret of their objective: to regain their place in the Olympic movement for the 2024 Paris Games. Any other scenario would be a failure.