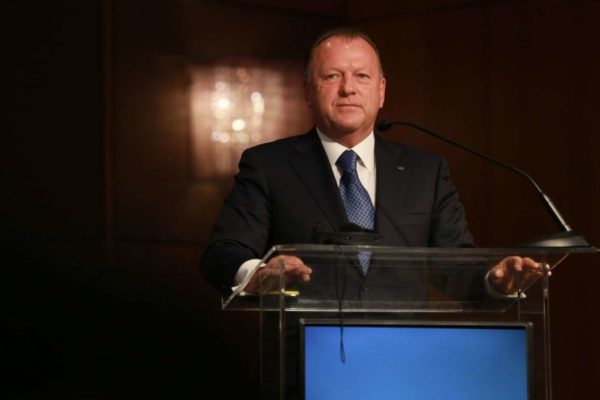 The sanitary crisis and the uncertainty surrounding the Tokyo Games have made us forget it, but 2021 is an election year for a large number of international sports bodies.

Coincidentally, three international sports federations are called to vote this week for a presidential election, in just two days. Judo (IJF) launched the movement. Skiing (FIS) will come immediately after. Swimming (FINA) will follow at the beginning of the weekend.

No bad surprises for Marius Vizer (photo above). The Romanian leader was re-elected on Thursday, June 3rd, in Budapest for a new mandate, the fifth in a row, as President of the International Judo Federation. He was the only candidate. He was unanimously re-elected.

At 62 years old, Marius Vizer will therefore lead world judo until 2025, after having taken the helm in 2007, succeeding South Korean Yong Sung Park.

In contrast, the battle for the presidency of the International Ski Federation is set to be intense. Voters are invited to choose their future president this Friday, June 4th, in an election organised virtually. For the first time in almost a quarter of a century, a new face will embody world skiing. Switzerland’s Gian-Franco Kasper, who has been in office since 1998, is handing over the keys to his office. He is 77 years old.

To succeed him, one woman and three men will compete for the votes of the national federations. The winner will only become the fifth president of an international federation which was created in 1924. He will be European, as were the first four.

The cast includes two Swedes: Mats Arjes, the current president of the Swedish National Olympic Committee, vice-president of the FIS, who is very involved in the Stockholm/Are bid for the 2026 Winter Games; Johan Eliasch, CEO of the Head Group. The third man is Swiss, like Gian-Franco Kasper: Urs Lehmann, the 1993 downhill world champion and current president of the Swiss Ski Federation. Finally, the British Sarah Lewis, former general secretary of the body, who was ruthlessly dismissed from her position last October, is aiming to become the first woman to preside over the FIS.

With such a wide range of candidates, the election promises to be highly indecisive. And the issue is not easy to guess. On paper, Mats Arjes may hold the best cards. Unlike his rivals, he is already in place, as vice-president. Earlier this week, he received the support of the powerful Norwegian Ski Federation.

The second Swede in the race, Johan Eliasch, stands before the voters as the wealthiest of the candidates. Proof of the extent of his network, he has been nominated by the British Snowsport Federation, Sweden’s choice having been in favour of Mats Arjes. Johan Eliasch, 59, has announced that he will step down immediately from his position as CEO of the Head Group if he is elected.

Sarah Lewis, a former skier who was selected for the 1988 Calgary Games, was nominated by the Royal Belgian Ski Federation, as Britain chose to support Johan Eliasch. She has pledged to forgo a presidential salary if she wins. She also promised to set up a solidarity fund to compensate for the losses due to the COVID-19 pandemic.

Finally, Urs Lehman is playing the small nations card, promising them a platform to express their expectations in the face of the omnipotence of the traditional winter sports countries. His programme is based on two principles: unify the countries and develop the disciplines.

The election for the presidency of the International Swimming Federation promises to be much less indecisive on Saturday, June 5th. Only one candidate will stand before the voters to succeed Uruguay’s Julio Maglione, who has been in office since 2009 but is now 85 years old: Kuwaiti Husain Al-Musallam.

In the absence of competition, Husain Al-Musallam will be elected for a four-year term at the head of FINA. He is already the first vice-president. He will move one step ahead. But his election, organised partly in person, from Doha in Qatar, and partly remotely, is already criticised within world swimming.

The issue comes from the origins of the next president. Kuwait was excluded from the Rio 2016 Games, where its athletes marched under the Olympic flag, and has never had a single finalist swimmer lined up at the Olympic Games or the world championships. The country did not even send a single competitor in the other aquatic disciplines to the last Summer Games.