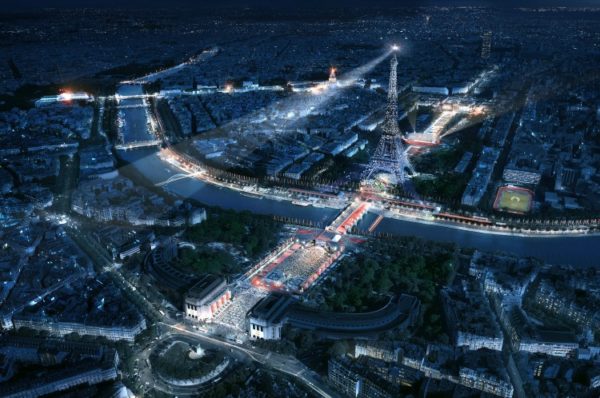 What will the opening and closing ceremonies of the Paris 2024 Olympic and Paralympic Games look like? With more than three years to go before the event, there is no urgency about the subject. In the midst of a sanitary crisis, it might even seem anecdotal. Yet it has become a topical issue.

Tony Estanguet, the president of the organising committee, acknowledged this on Tuesday, June 1st, at the end of the fourth meeting of the IOC coordination commission, held once again by videoconference: the OCOG teams are currently working on the issue, with the same guideline : to get things moving.

Tony Estanguet makes no secret of it: all options are on the table. Starting with the most innovative one: taking the ceremonies, or at least one of them, out of the Stade de France and bring them to Paris. The Seine could then serve as a central theme for the evening, with the Eiffel Tower having a prominent place in the decor.

The decision has not yet been made. The OCOG has given itself a few more months to decide. An announcement is expected before the end of 2021. December 13th might be choosen as the date to unveil the answer.

A ceremony outside the stadium would be a first for the Olympic Games. The Argentinians tried it before anyone else, but at the Youth Games in Buenos Aires in 2018. For Summer Games, it would be unprecedented.

What does the IOC think? “We are clearly very much in favour of it,” Belgian Pierre-Olivier Beckers, president of the coordination commission for Paris 2024, assured FrancsJeux. “Taking the ceremonies out of the stadium and into the neighbourhoods, to share the values of Olympism with the population, would meet the objective of making the Games useful to people. We encourage the Paris 2024 organising committee to move in this direction.”

In principle, the IOC’s clear stance is understandable. At a time when Japan is preparing to host the Tokyo Games in a mistrust climate among its population, any idea that could bring the general public closer to the Olympic event is surely worthwhile.

In practice, however, the option of one or more ceremonies outside the stadium would not be without effect on the Games’ budget. It would cut into ticketing revenues, while further inflating security costs. The IOC is not mentioning this, despite its obsession with encouraging organisers to cut costs.

In the meantime, Paris 2024 is focusing on the immediate future: the handover of the Olympic flag. It is supposed to take place during the closing ceremony of the Tokyo Games, on Sunday, August 8th, 2021. The Parisian organisers will be allowed to occupy the stage for about ten minutes, for a show whose tone and contours remain secret. Then Anne Hidalgo, the mayor of Paris, is expected to receive the five-ring flag from Yuriko Koike, the governor of Tokyo. Paris will then officially become the next host city of the Summer Games.

The French presence will be limited to the Tokyo Games because of the sanitary crisis. Tony Estanguet explained it: the OCOG is currently reduced to a delegation of about 50 people, less than half of the initial forecast. “And this number could still decrease,” he said. The members of Paris 2024’s board of directors will notably not be part of the trip.

However, resigning ourselves to a handover experienced remotely, at home, in front of our television screens is out of the question. “Our teams are currently working on how to generate impact in France around the Tokyo Games,” explains Tony Estanguet. “We want people to be able to experience the handover of the Olympic flag live.”

In Paris, a fan zone will be set up at the Trocadero, opposite the Eiffel Tower. On Sunday, August 8th, it will welcome personalities who were unable to travel to Japan for the Tokyo Games. It will also allow the public to learn about the Olympic disciplines in the presence of champions. The same concept should be duplicated, on a smaller scale, in a dozen other French cities.