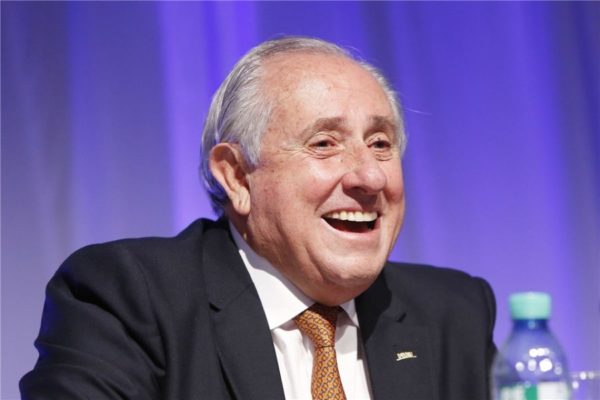 A storm is coming for Ary Graça. President of the International Volleyball Federation (FIVB), the Brazilian is suspected of belonging to a network of embezzlement and money laundering. A search was conducted on Thursday, May 20th, at his home in Brazil.

The information is reliable, since it is coming from Rio de Janeiro’s prosecutor’s office. The Brazilian justice also reveals that the police extended its search to the headquarters of the Brazilian Confederation of Volleyball (CBV), of which Ary Graça was the president between 1997 and 2012, before aiming higher and applying for the presidency of the FIVB.

Ary Graça is not the only official targeted by the Brazilian justice investigation. Nine other former CBV officials are targeted, as well as political figures and business leaders.

According to the prosecutor’s office, Ary Graça is suspected of embezzling funds from the CBV’s main sponsor, state-owned Banco do Brasil. The Brazilian then allegedly laundered the money received through fictitious contracts with shadow companies.

This investigation is not new. It was opened in 2013, a year after Ary Graça was first elected president of Volleyball World. It concerns the alleged creation of ghost companies in Saquarema, a hundred kilometers from Rio de Janeiro, a seaside town where the national volleyball and beach volleyball teams’ training center is located.

The home of Saquarema’s former mayor, Antonio Peres Alves, was also searched. As head of the city between 2002 and 2008, he is suspected of having signed municipal decrees allowing favorable tax conditions for the creation of front companies.

According to Rio de Janeiro’s police, the fraud involved nearly 52 million reals, which amounts to about 10 million dollars.

Ary Graça has not yet officially reacted to the case. But according to his lawyers, the Brazilian was “surprised” by the search of his home in Rio de Janeiro. They said that the president of the FIVB was not in Brazil this week, but in Lausanne, the headquarters of the international body, where he resides most of the year. The lawyers also assured that their client has already given all the necessary clarifications to the justice, and that he remains at the disposal of the authorities.

The CBV confirmed that agents were present on Thursday, May 20th, in its headquarters in Rio de Janeiro. The Brazilian body says it is a victim of former leaders, now mostly out of the landscape.

“According to the investigation, the Brazilian Volleyball Confederation could have been a victim of its leaders, who created false contracts to embezzle funds from the institution, pleaded the national body in a statement. CBV’s current management will fully cooperate with the investigation and, if the financial damage is proven, will take all necessary measures to return all amounts to the volleyball community.”

The FIVB also reacted to the suspicions of the Brazilian justice against its president. It did so via a press release: “The FIVB is aware of and surprised by the situation in Brazil. The FIVB President, Dr. Ary S. Graça F°, and the General Manager, Fabio Azevedo, both learned this information through the media and have asked their lawyers to act immediately to clarify what is clearly a misunderstanding. Both have strenuously denied the allegations made against them in today’s media coverage. Both the President and the Executive Director have instructed their attorneys to vigorously contest these allegations. Pending a full legal process, the FIVB will make no further comment.”

Ary Graça, 78, was first elected to the FIVB presidency in 2012, where he succeeded China’s Jizhong Wei. After an initial four-year term, he was re-elected in 2016, unopposed, to lead the international volleyball body until 2024.

He is not the first Brazilian sports executive whose name has been associated with a judicial investigation. Carlos Nuzman, the former president of the Brazilian Olympic and organizing committee for the 2016 Rio Games, was arrested in October 2017 on corruption charges. He was suspected of vote buying for Rio de Janeiro’s attribution of the Games in 2016. He was taken into custody.