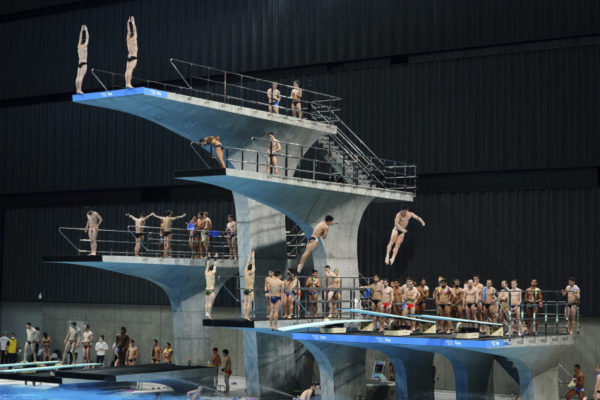 A taste of the Tokyo Games? For the first time since the resumption of pre-Olympic events last month in Tokyo, foreign athletes had the opportunity to compete in Japan. The diving and the volleyball wiped the plasters of the sanitary device prepared by the Japanese organisers. Track and field will follow during the week.

On the program, a stage of the Diving World Cup, qualifying for the Tokyo Games, and a friendly volleyball match between Japan and China.

When it comes to diving, the Japanese have thought big. Initially scheduled for April, then postponed from May 1st to 6th, the World Cup stage brought together around 225 athletes from 50 countries at the future Olympic Aquatic Center.

Anything but anecdotal, therefore, especially in the midst of the new wave of the COVID-19 pandemic, in the Japanese capital placed in a state of emergency. Australia got it right: they cancelled their diving team’s participation due to health risks, giving up their chances of being represented at the Games in all events in the discipline.

For the occasion, the Japanese organisers not only tested the competition venue, the Olympic apparatus and the protocol, as in a usual test event. They mainly checked the relevance of their sanitary measures.

The result? Strict. All competitors are subject to daily testing. They had to present a follow-up of their state of health during the 14 days before their departure for Japan. A negative PCR test at least 72 hours before their arrival was required. An additional check was carried out when they got off the plane, before leaving the airport.

American Sarah Bacon explained, “We are not allowed to go out of our rooms, where we have to stay at all times except when at the pool. No outing, not the slightest human interaction. Not easy to live with. But it is important that everything goes well“.

German Patrick Hausding, interviewed by the media behind a glass wall, made no secret of his frustration at not having had the opportunity to visit Tokyo. He probably won’t have another chance in less than three months at the time of the Olympics.

As the preliminary round warmed up on Saturday May, 1st, competition officials were forced to speak up to call the divers to order. They stood too close to each other, at the foot of the 3-meter springboard, without respecting the social distancing rules.

Lightweight device for the volleyball match between Japan and China, played at the Ariake Arena in Tokyo. But Chinese players were subjected to the same health constraints. They couldn’t leave their bubble. Comment from Guo Cheng, captain of the Chinese team: “As soon as we arrived in Japan, everything was taken care of by the organizers, including meals and accommodation. I felt completely safe“.

Next test: athletics. Six foreign athletes, not one more, will compete in the Sapporo Half Marathon, scheduled for Wednesday, May 5th, in Hokkaido Prefecture. Among them, the Dutchman Bart van Nunen and the German Katharina Steinruck, both qualified for the Tokyo Games marathon.

All the foreign runners entered are already present in Sapporo. They too are tested on a daily basis.

The event has been added to the list of pre-Olympic events. It was originally supposed to be organised as part of a road racing festival, but organisers had to scale back, canceling the mass events.