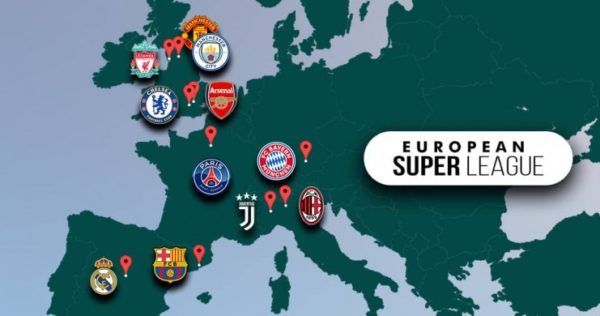 A revolution, nothing less. An earthquake. A shock wave. A quarter of a century after the Bosman ruling, European football is preparing to turn into another era. On Sunday April 18th, twelve of the continent’s biggest clubs announced the upcoming creation of a new competition, the European Super League. It could, if the project materialises, weaken the current Champions League, or even lead to its demise.

The European Super League is presented as an alternative to a Champions League presented by its dissidents as out of breath and at the end of the course. The new competition sets itself the goal of bringing together 20 teams. Fifteen of them, the founding members – the twelve clubs at the origin of the project, plus three others to be found (Bayern Munich and Borussia Dortmund in Germany, Paris Saint-Germain in France, are clearly targeted) – would be accompanied by five other teams, qualified at the start of each season according to modalities yet to be defined. A partially closed league, therefore, but not completely.

The twenty clubs would be divided into two pools of ten, with home and away matches, guaranteeing each team to play eighteen games during the first phase (compared to six in the current group stage of the Champions League). The top three from each group would advance to the quarter-finals. The fourth and fifth would meet in a play-off for the last two tickets. The rest would be more conventional, with two semi-finals back and forth, then a final on a single match.

The matches would be played in the middle of the week, so as not to compete with the national championships. But they would enter into direct competition with the Champions League.

They come from just three national leagues – Spain, Italy and England – but weigh heavy enough to endanger the current balance of European football. The initial group of the Super League brings together Real Madrid, FC Barcelona and Atlético de Madrid on the Spanish side, Juventus Turin, AC Milan and Inter Milan for the Italian side, Liverpool, Manchester United, Manchester City, Chelsea, Tottenham and Arsenal for the English Premier League. Between them all, they total forty Champions Leagues.

A company has already been created, The European Super League. It is chaired by Florentino Pérez (Real Madrid), assisted by two vice-presidents, Andrea Agnelli (Juventus) and Malcolm Glazer (Manchester United). It would be notably responsible for the management of audiovisual and marketing rights, but also the organisation of the competition.

The Super League was unveiled on the eve of a UEFA executive committee scheduled for Monday, April 19th at 9am in the Swiss city of Montreux. Everything but a coincidence. On its agenda is indeed a discussion on the new expanded format of the Champions League, supposed to come into force in 2024. Pending validation, UEFA’s plan to strengthen its flagship competition now seems very threatened.

The 12 clubs behind the Super League plan have not announced a launch date. But they make no secret of their desire to launch the mechanics for the 2022-23 season. According to a Super League statement, a women’s version would also be launched, “as soon as possible after the start of men’s competition, to help the development of women’s football and take it forward like never before“.

The numbers are already on the table. They weigh heavily. The 15 founding members would share at least 3.5 billion euros per year, a jackpot that could climb to 6 billion euros. The top six clubs could receive up to 350 million euros each. The promoters of the project have reached an agreement with the investment bank JP Morgan. The new competition wants to adopt rules of good financial conduct, in particular by establishing a payroll ceiling not exceeding a certain percentage of club turnover. In addition, part of the income would be allocated to a solidarity fund intended for other clubs and amateur football.

It’s getting organised. UEFA has already announced that clubs joining the Super League will be excluded from the Champions League even before the launch of the new competition. National federations have expressed their distrust of the project, pledging to “remain united in their efforts to stop” a machine deemed “cynical“. The Super League has already made it clear that it will not jeopardise the national championships, with no intention of entering the weekend window.

FIFA, for its part, has warned that players from Super League clubs will be banned from representing their national teams in its competitions, including the 2022 World Cup in Qatar. The threat is heavy. The body chaired by Gianni Infantino certainly expressed its “disapproval” on Sunday, April 18th, in a statement released at the end of the day. But, cautious, it does not completely close the door to the project. In a preliminary working document, the initiators of the Super League explained how 12 of their teams could qualify for the Club World Cup extended to 24 teams, the new juggernaut prepared by FIFA for 2023.

As for the sponsors of the current Champions League, they have called for an emergency meeting with UEFA. With the legitimate intention of revisiting their engagement alongside a competition threatened to take water.