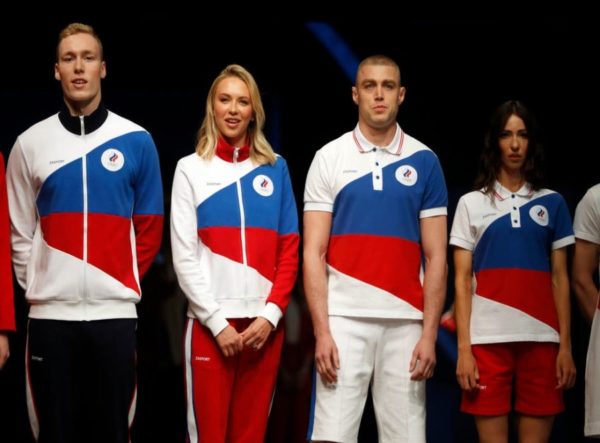 Let’s face it: Russia will be deprived of its flag and national anthem in less than 100 days at the Tokyo Games. But for the rest, its delegation of athletes will have the taste and colour of the country.

Like the rest of the world, the Russian Olympic Committee took advantage of the date marking 100 days before the opening, Wednesday April 14th, to unveil the official uniforms of its delegation at the Tokyo Games. By virtue of the exclusion of Russia from the Olympic movement for a period of two years, decided last December by the Court of Arbitration for Sport, the Russian flag is not included. The colours chosen, however, do not differ from previous Games.

The outfits of the delegation from the Russian Olympic Committee were presented in Moscow for a model parade. Jackets, polo shirts, t-shirts… Everywhere, the same trio of colours: white, blue and red. The three colours of the Russian flag.

Comment from Stanislav Pozdnyakov, President of the Russian Olympic Committee, quoted by AP: “You don’t have to be very imaginative. On the outfits presented today, we can make out our national flag in a very obvious way“.

In Lausanne, the outfits of the Russian delegation undoubtedly caused coughing on the floors of the Olympic House. But the Olympic body didn’t really have any other option than to validate the concept. “The uniforms of the Russian Olympic Committee for the Tokyo 2020 Olympic Games comply with established and published guidelines“, the IOC assured in a statement. “The outfits were approved on this basis”.

At the PyeongChang 2018 Winter Games, where Russia was already excluded as a nation, the delegation marched behind a sign bearing the name of Russia’s Olympic Athletes. In Tokyo, the outfits made by the ZASPORT brand will bear the name and logo of the Russian Olympic Committee (ROC). But these nuances will not fool anyone. Russia will be present at the Summer Games, with its athletes and its colours. And with its ambitions.

According to the latest Tokyo Games medal ranking estimate (photo below), released at D-100 by the Gracenote Institute, Russia would finish third among the nations. Athletes wearing the ROC logo would win 73 medals, 23 of which were gold. A position that could change, says Gracenote, depending on the final composition of the Russian selection, depending on the decision of the international federations concerned.

Russia, even hidden behind its National Olympic Committee, would form a leading trio with the United States, once again announced in first place (114 medals, including 43 gold), followed by China (85 medals, including 38 securities).

Host Japan should make full use of the home advantage. An advantage undoubtedly further accentuated by the presence in the stands of an almost exclusively Japanese audience. Gracenote predicted them a record 59 medals, including 34 gold, and a 4th place in the number of podiums. The Japanese set a record at the Rio 2016 Games, with 41 medals. They should do even better. 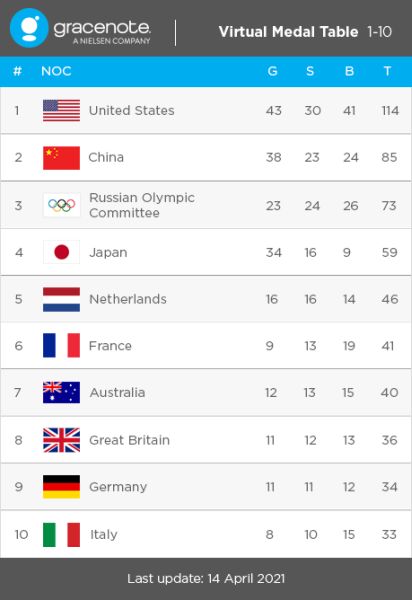