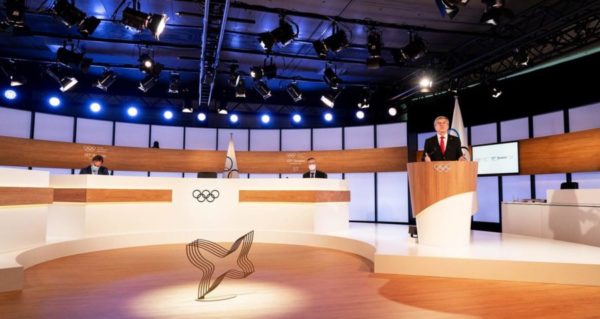 It is done. Cleanly, without a burst of voice nor a single background noise. Thomas Bach, 67, was re-elected Wednesday, March 10th, for a second – and final – term as IOC President.

The German leader’s first tenure in the presidential office began in September 2013 after a five-man battle for the succession of Belgian Jacques Rogge. But in eight years, the former fencer has stifled all hope for the competition. On Wednesday March 10th, he appeared alone in front of the voters, gathered in virtual mode for the 137th session of the Olympic body.

The only candidate, Thomas Bach could have achieved the perfect score. He wasn’t far from it. The electronic ballot gave him 93 votes, for a single ballot against. A single opponent, therefore, remained anonymous and difficult to identify, the protest often being silent in the Olympic movement. Four other members chose to abstain.

With this victory worthy of a banana republic, Thomas Bach will remain at the helm of the IOC until 2025.

His first term saw him weather the storms without ever giving the impression of running out of breath, between the doping scandal of the Sochi Games, the financial uncertainty of the Rio Games, the exclusion of Russia from the PyeongChang Games, and then the postponement of one year of the Tokyo Games.

In eight years, Thomas Bach has also had almost all (88%) of the resolutions of Agenda 2020 adopted. A strategic roadmap of which he himself presented the report to the 137th session, Wednesday 10th of March, at the start meeting. He was approved with a score heralding his future personal victory: unanimity minus four abstentions.

What will his next term look like? With less than 140 days until the opening, smart guy who could risk predicting the short-term future. But the Olympic movement knows it, even if its facade optimism suggests the opposite: anything can still happen in the run-up to the Tokyo Games. Including the worst.

No way, however, to open the door to speculation. His re-election in his pocket, Thomas Bach has shown to be true to himself, confident in controlling the health situation, optimistic about the smooth running of the Games.

“Tokyo remains the best prepared host city in Olympic history, and for now, we have no reason to doubt that the opening ceremony will be held well on July 23rd”, he pleaded by speaking from the Olympic House in Lausanne to the giant screen on which the faces of the hundred or so members of the body gathered in virtual mode were displayed.

For Thomas Bach, the question is no longer even whether the Games will take place, since the answer is clear. The only relevant question is “how will they take place?“.

The IOC has done its accounts: 270 major competitions at the world level have been able to take place since the start of the pandemic. They involved around 30 000 athletes and gave rise to more than 200 000 tests. The balance sheet? “Not a single one of these events has helped the spread of the virus“, says Bach. “We have clear and objective proof that large sporting events with a large number of participants can be organised while safeguarding the health of all. We are now in a more fortunate position because several vaccines are already operational. A considerable number of Olympic athletes have already been or will be vaccinated for Tokyo. The situation will continue to improve as we get closer to the opening ceremony“.

Bursting with confidence that the health situation would improve rapidly, Thomas Bach explained later in the day at a press conference that the question of the number of spectators at the Games could be decided in several stages. A first decision at the end of April, but without closing the door to updates “in May or June“.

Less expected, the proposal formulated by Thomas Bach on Wednesday March 10th before the session of the forum: a new version of the historic trilogy “Higher, faster, stronger”, invented by Baron Pierre de Coubertin. The IOC President wishes to complete it with a fourth word, Together. “Higher, faster, stronger – together,” a new team, he said, more in tune with the world after.

“It could be, from my perspective, a strong commitment to our core value of solidarity and an appropriate and humble adaptation to the challenges of this new world”, Bach suggested. “We need more solidarity within societies and between societies. The world is so interdependent that no one can solve the big challenges on their own anymore“. Very strong.