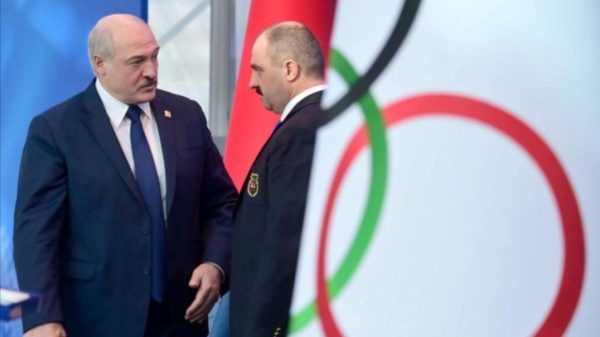 A Lukashenko can hide another in Belarus. But the IOC is not mistaken. Meeting on Monday March 8th by videoconference, two days before the 137th session (March 10 to 12), the executive committee refused to recognise the election of Viktor (photo above, right), son of the head of State Alexander Lukashenko (on the left in the photo), as President of the National Olympic Committee.

Last December, the Olympic body decided to dig into its sanctions drawer to respond to accusations of discrimination against Belarusian athletes by the ruling regime. They had suspended Alexander Lukashenko, president of the National Olympic Committee for more than 20 years. A suspension accompanied by a ban on attending the Tokyo Games as an official.

Never mind. In a country where governance is seen as a family asset, Alexander Lukashenko has abandoned his office as president of the National Olympic Committee… in favor of his son. Viktor, the son in question, also responsible for national security issues for his illustrious father, was elected on February 26th. Until then, he held the post of vice-president.

Only problem, but of size: Viktor Lukashenko was also suspended by the IOC, since last December, for the same reasons as his father. And with the same consequences. For the executive board of the Olympic body, his election is therefore not valid. Clarification: Viktor Lukashenko is also banned from entering European Union countries.

On Monday March 8th, the IOC said it was “extremely disappointed” by the attitude of the Belarusian Olympic Committee, guilty in its eyes of not having “properly protected the athletes against political discrimination within the NOC, their member federations or the sports movement”.

No question, therefore, of lifting the sanctions. The two Lukashenkos, father and son, therefore remain suspended. The payment of subsidies to the National Olympic Committee is still frozen.

The IOC has also announced that it does not recognise the election of Dmitry Baskov as a member of the NOC Executive Council either. Current president of the Belarusian Ice Hockey Federation, he was also suspended last December. His name is mentioned in the death of an opposition activist.

In contrast, the IOC is more lenient towards the National Olympic Committee. Despite the sidelining of its main leaders, it retains its place in the movement. A decision anything but anecdotal, since it ensures Belarusian athletes a presence at the Tokyo Games under their flag and their colors. Olympic scholarships and preparation aid are also excluded from the sanctions pronounced by the executive board.