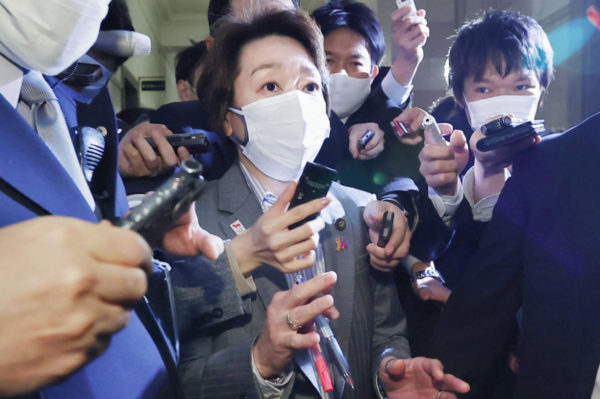 Habemus papam. Barring an unlikely turnaround, the Tokyo Games Organising Committee has found a new president. White smoke is expected to rise above his offices this Thursday, February 18, to formalise the news: the current Japanese Minister of the Olympic Games, Seiko Hashimoto, will take over from Yoshiro Mori.

Several sources close to the discussions confirmed it on the morning of Thursday: the former speed skater and track cyclist, known in the archipelago for having participated in seven editions of the Olympic Games, winter and summer, accepted the function.

The selection process for the new Tokyo Games president began last Friday, following the announcement of Yoshiro Mori’s resignation. A panel of eight people, four men and four women, was formed the same day to sort out the possible candidates.

It held its first meeting on Tuesday February 16, behind closed doors, with the initial task of listing the criteria leading to the appointment of the future president. The next day, Wednesday, the same eight people met a second time, still out of prying eyes and ears, to put names on a piece of paper.

According to Japanese media, their choice was reduced to one name: Seiko Hashimoto. Anything but a surprise, since she had been cited as a possible contender early in the process. Only problem: Seiko Hashimoto would have declared, at least initially, little interested in the function. She said she was reluctant to give up her portfolio as Olympic Minister less than six months before the Games.

Obviously, she changed her mind. The Japanese press assured this Thursday that Seiko Hashimoto has finally decided to accept the succession to Yoshiro Mori in the presidential office. Her appointment is expected to be confirmed later today by the Tokyo 2020 board.

56-year-old Seiko Hashimoto was born just five days before the opening of the 1964 Tokyo Games. A sign. Its name Seiko is written with the same first character, “seika”, as the Olympic flame in Japanese. Another sign.

Olympic medalist in speed skating at the Albertville Games in 1992, she has long had a dual sporting career, skating in the winter and cycling in the summer. To her credit, four participations in the Winter Games (Sarajevo 1984, Calgary 1988, Albertville 1992 and Lillehammer 1994), and three editions of the Summer Games (Seoul 1988, Barcelona 1992, Atlanta 1996).

The members of the selection panel were not mistaken: she ticks all the boxes. An international profile, knowledge of the Olympic and Paralympic Games, a strong political network and, now mandatory, a “deep understanding” of gender equality. Since 2019, Seiko Hashimoto has added a second ministerial term, the Olympic Games, to her role as minister responsible for women’s empowerment and gender equality.

Quickly entering politics, with a first term in the House of Councilors in 1995, on behalf of the Liberal Democratic Party, she never left the world of sport. She supported Tokyo’s bid for the 2020 Games, as a member of the board of directors of the Japanese Olympic Committee. She was head of mission for the Japanese delegation to the Rio 2016 Games.

According to the daily Mainichi Shimbun, Seiko Hashimoto should be replaced as Minister of the Olympics by another woman, Tamayo Marukawa. At 50, this former TV news anchor will return to a position she already held for a year, between 2016 and 2017.

A woman at the head of the organising committee. Another at the Department of the Olympics. Unintentionally, and to his greatest misfortune, Yoshiro Mori has fundamentally changed the image of the Tokyo Games. The change may well be beneficial.