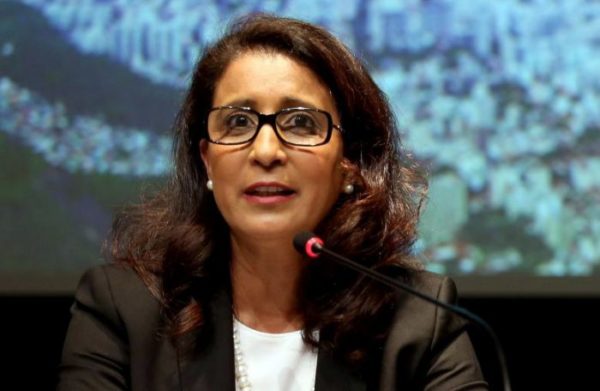 The IOC announced it last year by bulging its chest: the Paris Games in 2024 will be marked by parity between men and women for the number of events and medals. A first. But where is gender equality in the Olympic movement? Do female leaders weigh the same as their male counterparts?

The following day after International Women’s Sports Day, celebrated on Sunday January 24th, FrancsJeux interviewed one of the most influential women in the Olympic universe. Nawal El Moutawakel, 58, Olympic champion at 400m hurdles at the 1984 Los Angeles Games, has been a member of the IOC since 1998. She was Vice-President between 2012 and 2016. She currently sits on the Executive Board.

The Moroccan takes a shrewd but uncompromising look at the place of women in the sports movement and its institutions. She recognises the progress made, but remains aware of the way to go.

FrancsJeux: You are in 4th place in the ranking of the most influential francophones in the Olympic movement in 2020, published last month by FrancsJeux. You are also its first woman. What do you think of this position?

Nawal El Moutawakel: I am very honoured. But I wasn’t expecting it. I work with my head down, with passion and abnegation, to serve the Olympic movement, its values ​​and its development. I am fully involved in this mission. It has been guiding my steps for years.

In this same ranking, only five women appear among the top twenty. Does this result reflect the Olympic movement?

There are Nawal El Moutawakel all over the world. They are there, they work, sometimes in the shadows. The potential is real. I have met women heads of state during my career at the IOC. Dilma Rousseff, in particular, before the Rio 2016 Games. Today, a third of IOC members are women. Over the past few years, I have seen a new generation arrive, notably represented by Costa Rican Laura Chinchilla, or former President of the Republic of Croatia, Kolinda Grabar-Kitarovic. The future of the Olympic movement will be female. Thomas Bach works tirelessly on it. The number of women on the IOC commissions has never been greater.

There have never been so many women at the IOC, but are they listened to?

They must play their role, take their responsibilities in order to be more present, more decisive and more demanding. But I note that their voices are heard more and more in international forums. We owe it to Juan Antonio Samaranch. He was the first, during his presidency of the IOC, to create a Women’s Commission in the 1990s. He sounded the alarm bells to strengthen the place of women in our ecosystem. Then Jacques Rogge, and today Thomas Bach, continued on the same path. But everything must start from the clubs. They are the basis of everything. Women must be more present in clubs, to then win the National Olympic Committees and international federations. But not all jurisdictions move at the same speed. Some international federations have understood the message, others are making less progress.

Only two international federations of a summer Olympic sport, triathlon and golf, are today chaired by a woman …

That’s right, it’s been a short time. We will have to move the lines. The women are there, but we have to push them towards excellence, hard work and selflessness. But I still have high hopes. When I see how far we have come, on the pitch, in the competitions, I tell myself that a lot of progress has been made in a short period of time. At the 1984 Los Angeles Games, where the 400m hurdles, my event, was on the program for the first time, women made up only 23% of the competitors. Parity will be reached at the Tokyo Games.

When will a woman candidate for the IOC presidency?

This has happened before. Anita DeFrantz was a presidential candidate in 2001, after the departure of Juan Antonio Samaranch. I had found her to be very courageous, determined, and competitive. But the spirits of the day were not ready to vote for a woman. She is now the IOC’s First Vice-President. I admire her career very much. She was the village mayor at the Los Angeles Games when I was an athlete! But she is not the only one to influence the movement. Gunilla Lindberg has done a phenomenal job as chair of the PyeongChang 2018 Games Coordination Commission. Nicole Hoevertsz sits with me on the Executive Board and heads the Los Angeles 2028 Games Coordination Commission. Lingwei Li, in addition to being an extraordinary champion, successfully led the Coordinating Commission of the YOG Buenos Aires 2018.

Today, are spirits ready to vote for a woman?

Things change. Thomas Bach has always made the feminine element one of his concerns. He pushes to change attitude. In Africa, where there is still a long way to go, women are ruling Liberia, Ethiopia and Malawi. I still believe that anything is possible. At the Tokyo Games, all delegations will have at least one female representative.

Do you see a new generation coming to the IOC today, a new wave of women who can accelerate this evolution?

Yes. In the new generation, of course I see Kirsty Coventry. She is Minister of Sports in Zimbabwe and sits on the Executive Board. She arrives at the top. But she’s not the only one. We must also mention Danka Bartekova, Mikaela Cojuangco Jaworski and the Ethiopian Dagmavit Girmay Berhane. Other women have joined the IOC recently and make a huge contribution to the Olympic movement. I am thinking of the Finnish Sari Essayah, the Canadian Tricia Smith, the Thai Khunying Patama Leeswadtrakul, the Costa Rican Laura Chinchilla, the former President of the Republic of Croatia Kolinda Grabar-Kitarovic, or the Princess of Saudi Arabia Reema Bandar Al-Saud, also her country’s ambassador in Washington. They demonstrate day after day that women have their place in international sports. And that the Olympic movement, and the IOC, are right to give them the responsibilities they deserve and to rely on their talent.