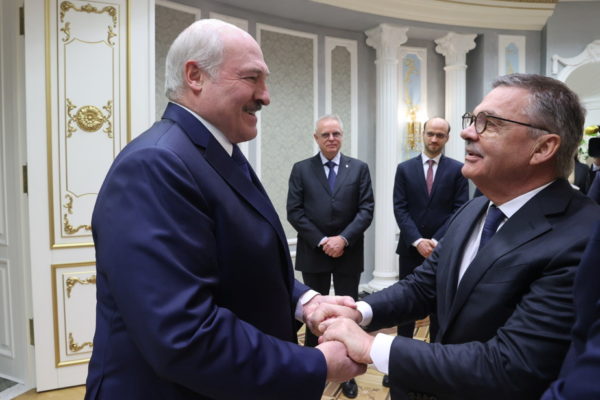 René Fasel is not afraid of controversy. The Swiss leader, president of the International Ice Hockey Federation (IIHF) and member of the IOC, visited Minsk, the capital of Belarus, in person. And he spoke face-to-face with one of the most contested political figures of the day, Alexander Lukashenko, the Belarusian head of state.

The meeting between the two men had been planned for a long time. It should have taken place at the end of last fall, but René Fasel was forced to postpone it, after having tested positive for the coronavirus and placed in isolation in Switzerland.

Anticipated, therefore, and imposed by the circumstances. Belarus is supposed to host the men’s ice hockey world championship next spring (May 21 to June 6). It shares its welcome with Latvia.

Only problem, but significant: the Latvian authorities no longer want to hear about a joint organisation with the Belarusian neighbour, shaken by the protest of part of the population after the dubious re-election, on August 9, of Alexander Lukashenko.

For René Fasel and for the IIHF, the subject is delicate. Withdraw Belarus from hosting the event? Not easy. Prefer the status quo and keep things as they are, ignoring Latvia’s request? Even less simple.

René Fasel packed his suitcase and made the trip to Minsk. In its wake, a small delegation from the IIHF made up of Council member Sergej Gontcharov and General Secretary Horst Lichtner.

In Minsk, the three men did not only meet Alexander Lukashenko. They also spoke with Roman Golovchenko, Prime Minister, also chairman of the organising committee for the 2021 Ice Hockey World Cup, and Sergei Kovalchuk, Minister of Sports.

The objective of the visit: to verify on the spot, in the country, the capacity of Belarus to co-organise the Men’s World Cup in four months. In the words of the international body, ensure “the proper organisation of the event and the safety of the players, supporters and officials” who will attend the event.

Facing René Fasel, Alexander Lukashenko proved to be a perfect host. He greeted the Swiss leader with the respect of a head of state, even a close friend, even giving him a hug. He gave him “Dear René”. Social networks have given off to their heart’s content.

But the head of state did not only plead the cause of his country. He pointed to the United States. “In our country, demonstrators and protesters do not storm government offices and legislative buildings”, said Alexander Lukashenko. “We have a completely normal situation from the point of view of the development of the democratic process”.

“The circumstances in Belarus have been different since last summer. We are here to face the situation and to find constructive solutions”, commented René Fasel in a statement. “The process started this morning (January 11) and will continue with further meetings in Minsk, followed by discussions in the IIHF Council”.

The Council of the international forum is due to discuss the issue of the 2021 World Cup at a meeting scheduled for January 25 and 26. A final decision is expected on this occasion.

Unlike the IIHF, the IOC did not go to Belarus to meet the head of state and check on the situation of the sports movement and the athletes. But it has already decided the question, on the basis of testimonies of athletes and coaches who have been repressed for participating in the protest movement. The international body suspended Alexander Lukashenko from all Olympic activities. They will not be able to make it to the Tokyo Games.